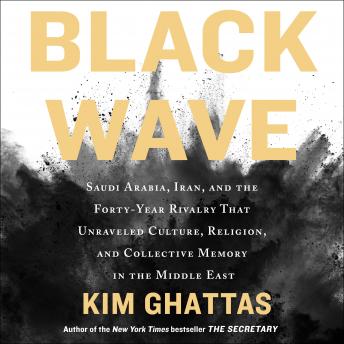 Black Wave: Saudi Arabia, Iran, and the Forty-Year Rivalry That Unraveled Culture, Religion, and Collective Memory in the Middle East

Kim Ghattas delivers a gripping account of the largely unexplored story of the rivalry between between Saudi Arabia and Iran, born from the sparks of the 1979 Iranian revolution and fueled by American policy.

With vivid story-telling, extensive historical research and on-the-ground reporting, Ghattas dispels accepted truths about a region she calls home. She explores how Sunni Saudi Arabia and Shia Iran, once allies and twin pillars of US strategy in the region, became mortal enemies after 1979. She shows how they used and distorted religion in a competition that went well beyond geopolitics. Feeding intolerance, suppressing cultural expression, and encouraging sectarian violence from Egypt to Pakistan, the war for cultural supremacy led to Iran's fatwa against author Salman Rushdie, the assassination of countless intellectuals, the birth of groups like Hezbollah in Lebanon, the September 11th terrorist attacks, and the rise of ISIS.

Ghattas also introduces us to a riveting cast of characters whose lives were upended by the geopolitical drama over four decades: from the Pakistani television anchor who defied her country's dictator, to the Egyptian novelist thrown in jail for indecent writings all the way to the murder of journalist Jamal Khashoggi in the Saudi consulate in Istanbul in 2018.

Great content and narration! I had no idea that Islam has so many different facets, American media always portrays this religion all under the same umbrella.

I learned a lot about the Muslim nations and differences between the Shiites, Sunnis and other sects since WW2 and recommend this book. It's also very current, discussing issues as late as 2019 such as women's rights. The reader is excellent and provides correct pronunciations of names and places.

very informative and in depth. Helped me to better understand the Middle East and it's geopolitics

This is what every person and politician should know about the Middle East. Captivating, engaging and sowell written. As an American.. thank you for helping me understand the history, not just the politics of this ongoing struggle.

This should be included in the curriculum of schools in Lebanon, Syria, Palestine, Pakistan and Egypt. We need to reflect in “what happened to us”. How our culture, values, hopes and fears were highjacked by the 3 facetted middle eastern regime that built its rein on ethnosectarianism (Sunnism, Shiism, Judeism)