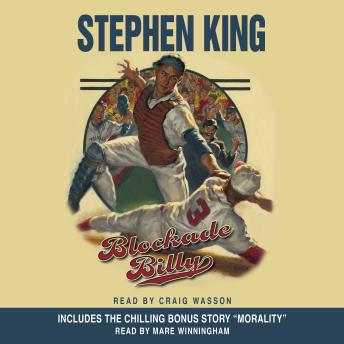 Even the most die-hard baseball fans don’t know the true story of William “Blockade Billy” Blakely. He may have been the greatest player the game has ever seen, but today no one remembers his name. He was the first--and only--player to have his existence completely removed from the record books. Even his team is long forgotten, barely a footnote in the game’s history.

Every effort was made to erase any evidence that William Blakely played professional baseball, and with good reason. Blockade Billy had a secret darker than any pill or injection that might cause a scandal in sports today. His secret was much, much worse... and only Stephen King, the most gifted storyteller of our age, can reveal the truth to the world, once and for all.

Originally published through Cemetery Dance Publications on April 20, 2010 as a $25.00 limited-edition hardcover, Stephen King and Cemetery Dance have made an arrangement with Scribner to make available a less expensive hardcover edition of Blockade Billy, with an on-sale date of May 25th, the same date the audiobook goes on sale. The Scribner edition will be available in all U.S. and Canadian retail outlets. Both the Scribner book and the Simon & Schuster audiobook will feature a bonus short story ('Morality').

The big secret is really a let down. Not worth the time

Couldn't finish the book.....listened to one disc and returned the audiobook.

This title is due for release on May 25, 2010
We'll send you an email as soon as it is available!