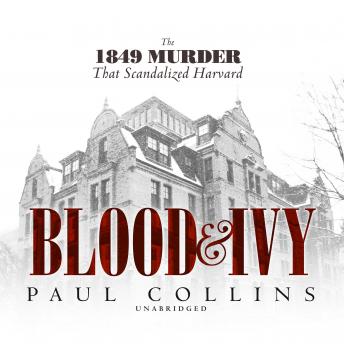 A delectable true-crime story of scandal and murder at America's most celebrated universityOn November 23, 1849, in the heart of Boston, one of the city's richest men vanished. Dr. George Parkman, a Brahmin who owned much of Boston's West End, was last seen that afternoon visiting his alma mater, Harvard Medical School. Police scoured city tenements and the harbor-some leads put Parkman at sea or in Manhattan-but a Harvard janitor held a much darker suspicion: that their ruthless benefactor had never even left the Medical School building.

His shocking discovery engulfed America in one of its most infamous trials, The Commonwealth of Massachusetts vs. John White Webster, Harvard's professor of chemistry. A baffling case of red herrings, grave robbing, and dismemberment, it became a landmark in the use of medical forensics. Rich in characters and atmosphere, Blood & Ivy explores the fatal entanglement of new science and old money in one of America's greatest murder mysteries.

This title is due for release on July 17, 2018
We'll send you an email as soon as it is available!