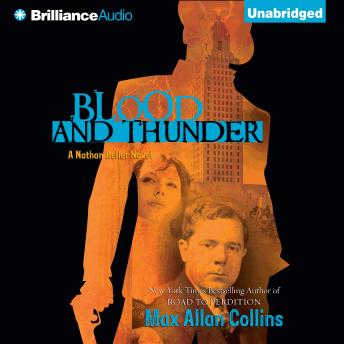 Presidential candidate—and force of nature—Huey Long, the “Kingfish,” is in fear for his life. After Nathan Heller delivers the former Louisiana governor a bulletproof vest, the Kingfish hires the Chicago private eye to investigate death threats from political rivals. Soon Heller runs head-on into an IRS investigation seeking millions skimmed from state workers for Huey’s “de-duct box”…and into the arms of the ex-governor’s lovely ex-mistress.

When the charismatic politician is shot down by a seemingly crazed doctor, Heller gets a new employer—the insurance agency fighting a double-indemnity claim from Long’s widow. Was the Kingfish truly the victim of assassination, or accidentally killed by his own bodyguards? A classic P.I. thriller built on historical fact, Max Allan Collins’ Blood and Thunder showcases Huey Long in all his gaudy glory, while delving deep into the heart of the deadliest swamps of Louisiana’s mob-infested politics.

“Collins’s sense of place and time is unerringly acute, and he happily indulges in recreating Long’s fiery stump style. Although Collins has carved out a mystery subgenre that he occupies nearly alone, he and his detective would be a tough act to follow.” —Publisher’s Weekly (starred review)

This title is due for release on February 14, 2012
We'll send you an email as soon as it is available!