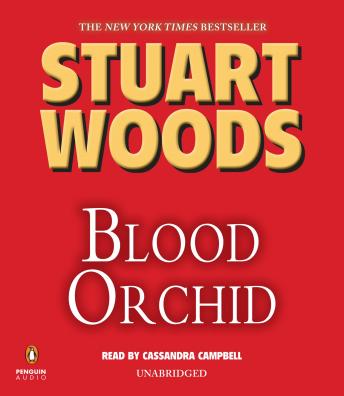 Blood Orchid is the third adventure of one of Stuart Woods's most engaging characters, Chief of Police Holly Barker. This time out, Holly is trying to get her life back together after the shattering loss of her fiancé. With the help of her wily Doberman, Daisy, and her father, Ham, she throws herself back into the job with a vengeance. At a local restaurant, Holly and Ham meet a gentleman new to the area, rich and dapper developer Ed Shine, who has found an evocative name for both his favorite flower and his latest real-estate venture: the 'Blood Orchid.'

But before Holly can settle into her routine again, bullets crash into the home of a friend and a floater is found bobbing in the Intercoastal Waterway. Holly connects these events to the death-by-sniper-fire of two Miami businessmen and a man evading questions at a Federal agency-but she can't imagine how these violent occurrences could be related to her own quiet, unspoiled town of Orchid Beach. Joining forces with a handsome FBI agent, she tracks the clues straight to their source, only to find a scam more lucrative and more dangerous than any this idyllic town-or Holly-has ever seen.