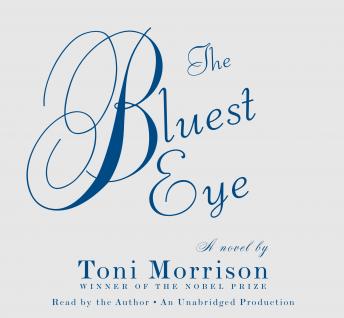 The Bluest Eye, published in 1970, is the first novel written by Toni Morrison, winner of the 1993 Nobel Prize in Literature.

It is the story of eleven-year-old Pecola Breedlove--a black girl in an America whose love for its blond, blue-eyed children can devastate all others--who prays for her eyes to turn blue: so that she will be beautiful, so that people will look at her, so that her world will be different. This is the story of the nightmare at the heart of her yearning and the tragedy of its fulfillment.

The Bluest Eye...... I read this book many moons ago, but since Morrison's passing I've had the urge to dive back into her literary masterpieces. Why not start with her first one. I remember when Toni said the reason for the title "The Bluest Eye", one of her childhood friends prayed for blue eyes. You see back in those days, if you had blue eyes, you we're considered important, not invisible, white. She just wanted to matter like the world showed toward the ones who donned Blue Eyes.... Pecola bared her father's baby. You see no one's seeds grew that year, except for the seeds her father drop in his "black dirt".....chile that took me out. Just as their father took their innocence he also took her virginity. He left her, just a shell, like i said no one's seeds grew that year, that included the baby. The story starts off with the Protagonist Claudia talking about herself, her sister's Frieda and Pecola, mother and father. Even with all the mess that happened throughout thos book Morrison did not dehumanize the characters but she uplifted the black cultures through her analogies and celebrated their language. Even after reading for the second time, I can't put into words how great of a read this is. I'll probably read it once more. #book2of2020 #bookworm #whatsnext

Loved it! So many experiences to relate to as a woman, black woman, mother, and child...this novel touches on realities that are present one way or another in lives of those historically marginalized. Recommend.

The book is a classic! The way the combined everyone together is so unique.

A riveting read by Toni Morrison of her brilliant first novel.

Such poetry in her deep understanding of the cultural essence of racial identity.

I love this book

Very detailed and well written. Scary and yet engaging.

Did not have word to word of the actual book, other than that it was a really good book.

As I didn't expect this sort of story, I did not enjoy it. It was too artsy and poetic for me. The characters switched without notice and it was a hard listen.

The story would have been much better with a different reader. She talked too sensuous and like she had a mouth full of jello. Her narrating ruined the book.

As a Toni Morrison fan, I did not care for this audiobook. First, being abridged, it was confusing to follow all the characters and relationships. Second, the reader narrated in a soft, monotone manner - very boring, except for when she was using character voices. Overall, a big disappointment.

Beautifully written book - reads like poetry. It was so visually stimulating that you felt like a character experiencing that moment.

i love the voice of the reader of this book. its so soft and absolutely beguiling, a pleasure to listen to. the story is well told, sad but true, of the life of black people, especially children, in the southern states. its hard to say more about that, all of it having been said so many times. this story tears at your heart for the little black girl who wanted blue eyes. its hard to listen to for pleasure, one has to feel pain. i usually want a more relaxing story at the end of my day but this one is riveting.

This story is sad but an eye opener. I am glad I listened to it.

This was a very sad story. I thoroughly enjoyed this book although very different from the ones I normally choose. It was very enjoyable. I would highly recommend it. It is fairly short.

I was a bit caught by surprise with this one. It was a good combination of the time period and the plot. I wasn't expecting it. It was very, very good.

Really enjoyed this book. Gave me a different perspective.

Poignant, disturbing, truthful, amazing.....the best book I've read in years. It will stick with me forever. Please read this, you won't regret it.

I love listening to books that are of this era.... but this story was intriguing. This one is a must buy.

As the varied reviews of this book demonstrate, this story is a good example of how our perceptions affect every facet of our lives. Very insightful and thought-provoking. The narrators did an excellent job in bringing the characters to life, and getting across the mood of the events in this story. Well worth a listen.

My first experience with audio books. A very interesting story and I didn't want to get out of my car. She is a very talented story teller as well. This story gives a very vivid snapshot of life of the children during that time and how hard life was and how the smallest things in their mind they felt would make a difference.

Unfortunately I didn't get a chance to listen to this book. I turned it off after one minute. The reader is AWFUL! She makes this sticky spitty sound when she talks and it's like nails on a chalk board to me. Gross gross gross. Maybe this doesn't bother other people but I think that a narrator in an audio book should be clear and pleasent to listen to. What a shame because it seems like such a good story.

I enjoyed this very much. An incredibly well written story and the way they chose to narrate it is POWERFUL. I love Morrison's voice, LOVE IT! If this story doesn't convict your heart about racial injustices, check your pulse. One caution though, it isn't easy listening! This is deep, thought provoking stuff. It isn't trying to make your drive home comfortable. But it is worth the listen.

rent this one. Beautifully written with wonderful description and masterful storytelling. The characters are developed with nuance and sensitivity. The narration was done by Toni Morrison with all the the dialogue being read by Ruby Dee- a style that is extremely effective. The story is packed with emotion and the writing is exquisite, which makes for great listening.

I did like this story, it held my attention and kept you guessing.

I couldn't make it through the 1st cd. I found it to move very slowly and it was a bit boring, couldn't grab my attention.

You have to be a Toni Morrison fan and be willing to go with her style, but if you are this book will be what you expect from her. It's incredibly depressing, but listening to her voice is soothing even through the tough times.

Sad story, but engrossing. The narration was wonderfully done, I enjoyed this audiobook very much!

Depressing. Hard to follow as it jumps from character to character. Very unsatisfying ending. On the positive side, the word pictures created by the author are very good.