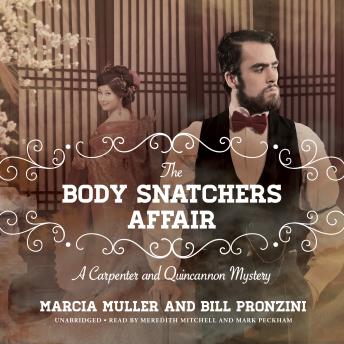 The Body Snatchers Affair: A Carpenter and Quincannon Mystery

Drug lords, missing millionaires, corrupt cops ... justanother day for Carpenter and Quincannon Detective Services.
Two missing bodies and two separate investigations takeCarpenter and Quincannon from the heights above San Francisco Bay to the depthsof Chinatown's opium dens.
For John Quincannon, this is a first: searching a Chinatownopium den for his client's husband, missing in the middle of a brewing tong warset to ignite over the stolen corpse of Bing Ah Kee.
Meanwhile, his partner, Sabina Carpenter, unsure of the darksecrets her suitor might be concealing, searches for the corpse of amillionaire, stolen from a sealed family crypt and currently being held forransom.
With the threat of a tong war hanging over the city-a warperhaps being spurred on by corrupt officials-Carpenter and Quincannon have notime to lose in solving their cases. Is there a connection between the two bodysnatchers? Or is simple greed the answer to this one?
And why is the enigmatic Englishman who calls himselfSherlock Holmes watching so carefully from the shadows?

This title is due for release on January 6, 2015
We'll send you an email as soon as it is available!