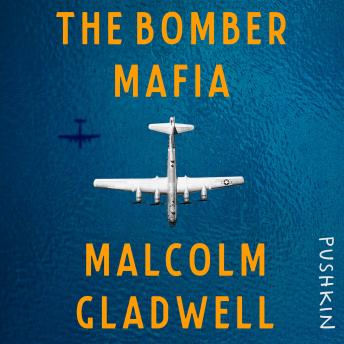 The Bomber Mafia: A Dream, a Temptation, and the Longest Night of the Second World War

In The Bomber Mafia: A Dream, a Temptation, and the Longest Night of the Second World War, Malcolm Gladwell, author of New York Times bestsellers including Talking to Strangers and host of the podcast Revisionist History, uses original interviews, archival footage and his trademark insight to weave together the stories of a Dutch genius and his homemade computer, a band of brothers in central Alabama, a British psychopath, and pyromaniacal chemists at Harvard. As listeners hear these stories unfurl, Gladwell examines one of the greatest moral challenges in modern American history.

Most military thinkers in the years leading up to World War II saw the airplane as an afterthought. But a small band of idealistic strategists had a different view. This “Bomber Mafia” asked: What if precision bombing could, just by taking out critical choke points — industrial or transportation hubs – cripple the enemy and make war far less lethal?

In Revisionist History, Gladwell re-examines moments from the past and asks whether we got it right the first time. In The Bomber Mafia, he employs all the production techniques that make Revisionist History so engaging, stepping back from the bombing of Tokyo, the deadliest night of the war, and asking, “Was it worth it?” The attack was the brainchild of General Curtis LeMay, whose brutal pragmatism and scorched-earth tactics in Japan cost thousands of civilian lives but may have spared more by averting a planned US invasion.

Things might have gone differently had LeMay’s predecessor, General Haywood Hansell, remained in charge. As a key member of the Bomber Mafia, Haywood’s theories of precision bombing had been foiled by bad weather, enemy jet fighters, and human error. When he and Curtis LeMay squared off for a leadership handover in the jungles of Guam, LeMay emerged victorious, leading to the darkest night of World War II.

I love Malcolm Gladwell. I love his voice I love his thoughts I’ve read and watched so many of his works. I don’t love this. What part of him thinks a subject as intense and curious as the bomber command in WW2 would be enriched by distracting mood music and sound effects. This is not an audiobook it is a pimped podcast. Sorry Malcomson. Can do better.

As noted in the narration, this is a podcast first, then a book later. A reverse order of the usual. Some unexpected sound effects but it is about entertainment, hence the evolution of dull narrators to actors. Bottom line is that I liked it. MG is on the leading edge of this evolution.

Another great story from Gladwell, he writes fantastic stories that are compeling and interesting.

Loved this book! Got it from my son as a gift in printed form but decided to try the audiobook for when I’m driving. So glad I did! The snippets of real interviews and sound bites added nicely to an already good book. Highly recommend if you like a solid moral dilemma and/or enjoy your history mixed with your science.

Absolutely love this book! So much research was conducted!

Excellent work by Malcolm Gladwell. If you are a history buff or just interested in aviation you will love this audio book.

One always learns so much from Mr Gladwell, and this book is no exception. Apart from his delightful voice and the fascinating account of the evolution of precision bombing, this book stimulated me to find out more about the characters involved. A terrific « read ».