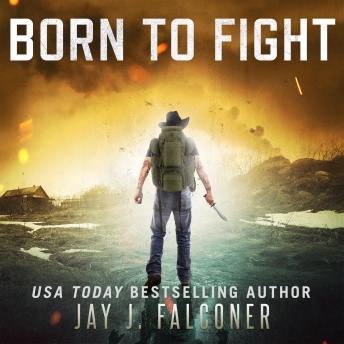 Cyber-Attacks. EMPs. Invasion. War. When the end comes, few will have the ability to survive.

When a coordinated EMP attack takes out the nation’s power grid, a small town finds itself at ground zero of an all-out invasion.

With limited options and no time to prepare, the citizens have no choice but to turn to a mysterious drifter, Jack Bunker, for help.

The former combat engineer has the skills to keep them alive, but he won’t be able to do it alone, not against an overwhelmingly superior force.

Somehow he’ll have to find a way to transform the mild-mannered townsfolk into military-grade warriors and lead them into battle, despite his dark past that leads some to wonder whose side is he really on?

Born to Fight is an explosive, high-octane post-apocalyptic survival thriller. If you like pulse-pounding action, resourceful warriors, and deep political intrigue, then you’ll love this bestselling tale of true grit.

If you like Rambo and Red Dawn, then buy Born to Fight now to join the fight for freedom!

Rated R for Violence and Language

*** Previously published as Bunker, books 1 through 5.

This title is due for release on July 19, 2021
We'll send you an email as soon as it is available!