Bound to You in Japan 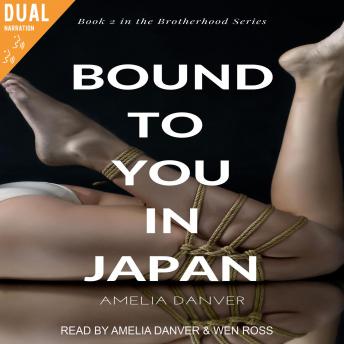 In the second installment of the Brotherhood series,

29-year-old “Alec” Alexandre Kitamura Sousa was once a ruthless, calculating, and efficient CIA field agent until his assignment brought his world colliding with Cathy’s. Now he is completely and utterly obsessed with the sweet girl. She has messed with his logical mind. When the Hostage Rescue Team failed in their rescue op, and Cathy was whisked away to Japan, Alec abandoned all reasons and went rogue, taking on a new assignment of his own in Osaka, Japan, in order to find her.

But what awaits him in Japan is nothing like he could ever imagine. The Brotherhood’s web of conspiracy runs deeper than any previous intel provided by the CIA assets within or without the country.

Alec is once again torn between the desire to keep Cathy by his side, or serving his country.

Could he ever give her up, knowing that the fate of the world is at stake?

19-year-old university student 'Cathy' Cathryn Johnson is bought by a new Shujin, her new Yakuza Master, and has to serve him in this foreign land. He is kind, but severe when it comes to disciplining her. The contrast between him and Alec is like night and day. The latter has only given her a taste of what dominance and submission could be, but her new Master is about to teach her all there is to know about the pleasures of the flesh.​

Could she escape from him,

and return to her old life back in the US?

The plot thickens in this sequel to the bestselling novel in the Brotherhood Series, Claiming You in Eden.

Bound to You in Japan

This title is due for release on December 16, 2020
We'll send you an email as soon as it is available!