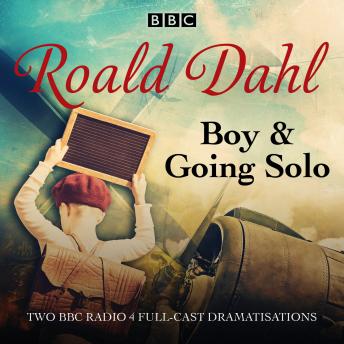 These two compelling adaptations, based on Roald Dahl’s real-life tales of his of his boyhood and youthful overseas adventures, celebrate his remarkable life and commemorate his genius.

Boy Dahl’s childhood was one of excitement, wonder, terror and sadness. From his fascination with the local sweetshop to the Great Mouse Plot, the horrors of boarding school, the obnoxious Boazers and his time as a chocolate taster for Cadbury’s, we hear of the extraordinary events that shaped him and inspired his bestselling books.

Going Solo Setting sail for Africa on the SS Montola, aged 22, Dahl is plunged into an unfamiliar world of eccentric colonial characters. In Tanzania he enjoys life on the savannah, encountering lions and deadly mambas – but when World War II breaks out, and he must round up the Germans in Dar es Salaam, he experiences the brutality of war. As he leaves the bush behind and takes to the skies as an RAF pilot, many thrilling adventures and dangerous missions will ensue before he finally makes his way back home...

Starring Patrick Malahide as the voice of Dahl, these colourful dramatisations will carry you away into worlds every bit as amazing, strange and memorable as the ones in his acclaimed fiction. Duration: 3 hours approx

This title is due for release on November 3, 2016
We'll send you an email as soon as it is available!