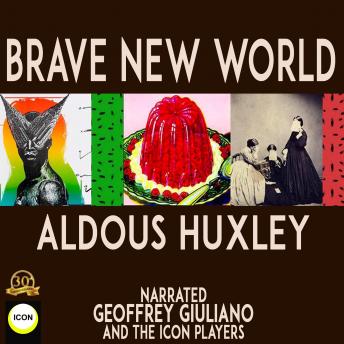 Narrated By: Geoffrey Giuliano And The Icon Players

Brave New World is a dystopian social science fiction novel by English author Aldous Huxley, written in 1931 and published a year later. Largely set in a futuristic World State, whose citizens are environmentally engineered into an intelligence-based social hierarchy, the novel anticipates huge scientific advancements in reproductive technology, sleep-learning, psychological manipulation, and classical conditioning that are combined to make a dystopian society that is challenged by only a single individual: the story's protagonist. Huxley followed this book with a reassessment in essay form, Brave New World Revisited (1958), and with his final novel, Island (1962), the utopian counterpart. The novel is often compared to George Orwell's 1884.

Author Aldous Huxley was an English writer and philosopher. He wrote nearly fifty books, both novels and non-fiction works—as well as wide-ranging essays, narratives, and poems.

Born into the prominent Huxley family, he graduated from Oxford, with an undergraduate degree in English literature. Early in his career, he published short stories and poetry and edited the literary magazine Oxford Poetry, before going on to publish travel writing, satire, and screenplays. Huxley spent the latter part of his life in the United States, living in Los Angeles from 1937 until his death. By the end of his life, Huxley was widely acknowledged as one of the foremost intellectuals of his time. He was nominated for the Nobel Prize in Literature nine times and was elected Companion of Literature by the Royal Society of Literature in 1962.