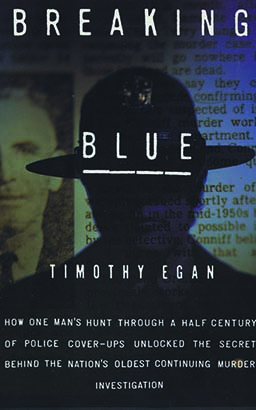 In Breaking Blue, Timothy Egan reports a true story that reads like a thriller and offers a compelling social history of Spokane, Washington, and the Inland Northwest.

Gradually what starts out as an intellectual exercise becomes an obsession. Bamonte asks questions that unfold layer upon layer of unsavory detail. His determination eventually leads him to the murder weapon—missing half a century—and then to the ex-cop whom Bamonte is convinced is the murderer.

“When it comes to this spectacularly mildewed corner of American linoleum, Timothy Egan gets it right.” — Tom Robbins

“As a former police reporter I can give Breaking Blue the ultimate complement—I wish I had written it. No one who enjoys mystery can fail to savor this study of a classic case of detection.” — Tony Hillerman

“An engrossing tale of corruption in the Northwest.” — Chicago Sun-Times

This title is due for release on February 2, 2017
We'll send you an email as soon as it is available!