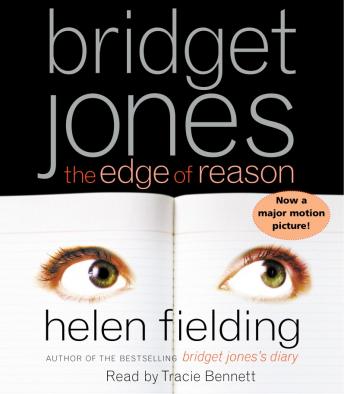 Bridget Jones: The Edge of Reason

With another devastatingly hilarious, ridiculous, unnervingly accurate take on modern womanhood, Bridget Jones is back. (v.g.)
Monday 27 January:
'7:15 a.m. Hurrah! The wilderness years are over. For four weeks and five days now have been in functional relationship with adult male, thereby proving am not love pariah as recently feared.'

Wednesday 5 March:
'7:08 p.m. Am assured, receptive, responsive woman of substance. My sense of self comes not from other people but . . .from . . .myself? That can't be right.'

Lurching from the cappuccino bars of Notting Hill to the blissed-out shores of Thailand, everyone's favorite Singleton Bridget Jones begins her search for The Truth in spite of pathetically unevolved men, insane dating theories, and Smug Married advice. She experiences a zeitgeist-esque Spiritual Epiphany somewhere between the pages of How to Find the Love You Want Without Seeking It (can self-help books really help self?), protective custody, and a lightly chilled Chardonnay.

Bridget Jones: The Edge of Reason

This title is due for release on January 11, 2005
We'll send you an email as soon as it is available!