The Bright Empires Series: The Skin Map, The Bone House, The Spirit Well, The Shadow Lamp, The Fatal Tree 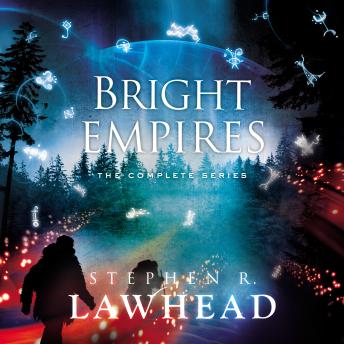 The Bright Empires series is a unique blend of epic treasure hunt, ancient history, alternate realities, cutting-edge physics, philosophy, and mystery. The result is a page-turning, adventure like no other.

Kit Livingstone’s great-grandfather reveals an unbelievable story: the ley lines throughout Britain are not merely the stuff of legend or weekend hobby of deluded cranks but pathways to other worlds.

One explorer knew more than most. Braving every danger, he toured both time and space on voyages of heroic discovery. Ever on his guard and fearful of becoming lost in the cosmos, he developed an intricate code—a roadmap of symbols—that he tattooed on his body. This Skin Map has since been lost in time. And the race is on to discover its secrets.

Kit is on a quest to understand the impossible mission he inherited from Cosimo: to restore a map that charts the hidden dimensions of the multiverse. Survival depends on staying one step ahead of the savage Burley Men.

Those who know how to use the ley lines have left their own world behind to travel across time and space—down avenues of Egyptian sphinxes, to an Etruscan tufa tomb, into a Bohemian coffee shop, and across a Stone Age landscape where universes collide—in this, the second quest to unlock the mystery of The Bone House.

Kit is mastering the ability to travel across realities using ley lines and has forged a link from the Bone House, a sacred lodge made of animal bones, to the fabled Spirit Well, a place of profound power.

Cassandra Clarke is overseeing an archaeological dig in Arizona when a chance encounter transports her to 1950s Damascus. There, she finds herself unwillingly drawn to the Seekers—the last living remnants of the Zetetic Society who need her help to track down the missing Cosimo Livingstone and his grandson Kit.

But there are darker forces at work in the universe whose agents always seem to be one step ahead of the rest—and they’re all desperate to gain the ultimate prize in this treasure hunt where the stakes increase at every turn.

Kit, Mina, Gianni, Cass, Haven, and Giles have gathered in Mina’s 16th-century coffee house and are united in their determination to find a path back to the Spirit Well. Yet, with their shadow lamps destroyed and key pieces of the map still missing, the journey will be far more difficult than they imagine. And when one of their own disappears with Sir Henry’s cryptic Green Book, they no longer know who to trust.

The quest for answers is no longer limited to recovering an unknown treasure. The fate of the universe depends on unraveling the riddle of the Skin Map.

It started with small wrinkles in time: A busy bridge suddenly disappears, spilling cars into the sea. A beast from another realm roams modern streets. Napoleon’s army appears in 1930s Damascus ready for battle. But that’s only the beginning as entire realities collide and collapse.

Kit and Cass are back in the Stone Age trying to reach the Spirit Well. But an enormous yew tree has grown over the portal, effectively cutting off any chance of return. Unless someone can find a solution—and fast—all Creation will be destroyed in the universal apocalypse known as The End of Everything.