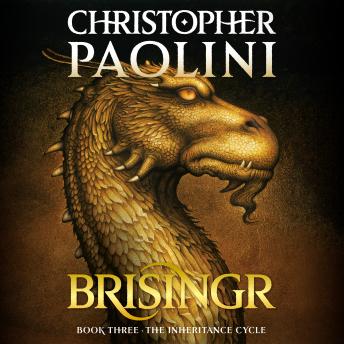 #3 of The Inheritance Cycle

The Empire is at war and the stakes have never been higher in the third book of the Inheritance Cycle, perfect for fans of Lord of the Rings! This New York Times bestselling series has sold over 35 million copies and is an international fantasy sensation.

Eragon is the greatest hope to rid the land of tyranny. Can this once simple farm boy unite the rebel forces and defeat the king? Following the colossal battle against the Empire's warriors, Eragon and his dragon, Saphira, have narrowly escaped with their lives. Still, there is more adventure at hand for the Rider and his dragon, as Eragon finds himself bound by a tangle of promises he may not be able to keep.

When unrest claims the rebels and danger strikes from every corner, Eragon must make choices-choices that will take him across the Empire and beyond, choices that may lead to unimagined sacrifice.

Features interlocking art that reveals an image across the spines of all four books! And don’t miss the most recent book set in Eragon's world, The Fork, the Witch, and the Worm: Tales from Alagaësia!

'Christopher Paolini is a true rarity.' --The Washington Post

First book I’ve ever listened to.. I fell in love.

The narrator does a pretty good job with the voices of the characters but Saphira’s voice is super goofy. It took me about half the book to stop laughing out loud every time she spoke. Other then that it was quite an entertaining listen.

So I had already read the whole series before this and absolutely loved them. Some of my favorite books to read when I dont have anythig else to read. However when I first listened to the audio book and the narration, I realized that this was much better than reading the book! I love it!

Absolutely loved this series and the narrator was amazing!

Great book! While some parts of it drag on, those parts are necessary for readers to fully understand Eragon's world. This book is full of action and plot twists the reader doesn't expect. The narrator is amazing as well! The voices fit the characters well.

loved the book, and loved the narrator

I love the narrator in all aspects except Sapphire's voice isn't what I imagined. It's not so much an issue, just when I read this series in my younger years I played her voice in my head in and much more elegant almost soothing tone, similarly to how he does Arya. I bit deeper without the growl. I've gotten used to it over the listens and now it makes sense, but it was strange at first. Great listen!

On to the fourth book! Love this series

First off, shout out to the awesome narrator, he is killing the charachter voices. Awesome series, wished I started reading this series a long time ago but the movie threw me off. As I'm finding out, more and more is that the books embody more of the characters. About to start the next book.

Best book of the series

I loved this book!

I loved the twist in this book!

Love this series, not what I expected for the voices it in getting used to it!

This title is due for release on September 20, 2008
We'll send you an email as soon as it is available!