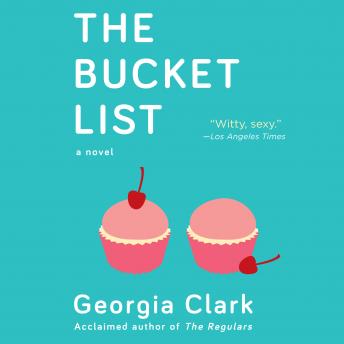 From the author of the critically acclaimed “lively and engrossing parable for women of all generations” (Harper’s Bazaar) The Regulars­ comes a deeply funny and thoughtful tale of a young woman who, after discovering she has the breast cancer gene, embarks on an unforgettable bucket list adventure.
Twenty-five-old Lacey Whitman is blindsided when she’s diagnosed with the BCRA1 gene mutation: the “breast cancer” gene. Her high hereditary risk forces a decision: increased surveillance or the more radical step of a preventative double mastectomy. Lacey doesn't want to lose her breasts. For one, she’s juggling two career paths; her work with the prestigious New York trend forecaster Hoffman House, and her role on the founding team of a sustainable fashion app with friend/mentor, Vivian Chang. Secondly, small-town Lacey’s not so in touch with her sexuality: she doesn’t want to sacrifice her breasts before she’s had the chance to give them their hey-day. To help her make her choice, she (and her friends) creates a “boob bucket list”: everything she wants do with and for her boobs before a possible surgery.
This kicks off a year of sensual exploration and sexual entertainment for the quick-witted Lacey Whitman. The Bucket List cleverly and compassionately explores Lacey’s relationship to her body and her future. Both are things Lacey thought she could control through hard work and sacrifice. But the future, it turns out, is more complicated than she could ever imagine.
Featuring the pitch-perfect “compulsively delicious” (Redbook) prose of The Regulars, The Bucket List is perfect for fans of Amy Poeppel and Sophie Kinsella.