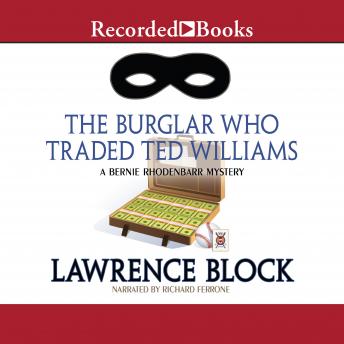 The Burglar Who Traded Ted Williams

Fans will rejoice as New York's most charming burglar returns to action. Greenwich Village bookseller Bernie Rhodenbarr has perfected the art of breaking and entering, as well as that of clever repartee. Bernie gets plenty of opportunity to exercise both his wit and his lock-picking muscles, as he juggles old friends, new 'employees,' potential girlfriends, and various criminal charges. Bernie is seriously considering retiring from his life of crime, now that his used bookstore is finally turning a small profit. Then his nasty new landlord raises the rent-by $10,000 a month-and Bernie is hard pressed to resist the temptation to supplement his income. But when a dead body turns up, and an invaluable baseball card collection is missing, who will believe that Bernie had nothing to do with it? Narrator Richard Ferrone's deadpan delivery offers the perfect contrast to Bernie's giddy misadventures. It would be a crime to miss this fabulous performance.

This title is due for release on August 22, 2008
We'll send you an email as soon as it is available!