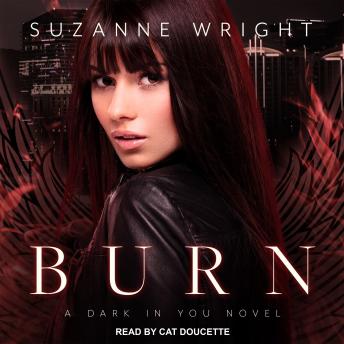 Part of a small demon lair in Las Vegas, tattooist Harper Wallis lives a pretty simple life. That changes overnight when she discovers that her psychic mate, or 'anchor,' is a guy who's rumored to be the most powerful demon in existence. Compelling, full of secrets, and armed with raw sexuality, Knox Thorne is determined to claim her as his anchor, creating a psychic bond that will prevent their inner demons from ever turning rogue.

The billionaire also wants Harper in his bed.

She's not so sure she wants either of those things. No one seems to know what breed of demon Knox is, only that he's more dangerous than anything she's ever before encountered. But he refuses to walk away. And when an unknown danger starts closing in on Harper, it seems that Knox is the only one who can keep her safe.

As Prime of his Las Vegas lair and a successful businessman, Knox Thorne is used to getting what he wants, and he wants Harper. He'll have her, and he'll keep her safe from the threat that looms over her. Because Knox protects what's his. He won't allow anyone to take her from him. Even if it will mean letting the demon inside him rise and wreak the havoc it was created to make.

way too much sex and not nearly enough plot. All the sex got really boring, and some of the scenes were really long. I got to the point where I'd just roll my eyes and skip through the sex scenes. I almost gave up on the boy totally but 2/3 of the way through the book the plot got a little better with faster sex scenes. Didn't feel much different than watching a porn, just in audio version. if that's your thing, go for it. personally, I think sex in a book CAN be great if done correctly. build the characters, the world, the plot, and relationships first. do a slow burn over a free books. books like this mostly just seem like empty smutt to me. wasn't the worst I've heard by any means but not good either. doubt I'll try another book by this author.

Incredibly tacky and stereotypical, ridiculous dialogues, immature and cringing narration where everything is said with too much intensity and cheap American teenager vibes.

when I first read the description, I was like "this sounds interesting." when I got through the first chapter I kept reading till I finished the book in one knight. I already on book two. this is a series I'd reread again.

Book was good. Narrator... not the worst but very annoying just the same.

this book is great

Second time listening to thing, and it's still so good.

great book! sometimes the dialog was cheesy but all in all good

Suzanne Wright is one of my favorite authors and she delivered again with this one! I love that the h isn't afraid to stand up for herself and takes no shit. Highly recommend!