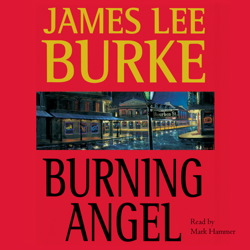 When Sonny Boy Marsallus returns to New Iberia after fleeing
for Central America to avoid the wrath of the powerful Giacana
family, his old troubles soon follow. Meanwhile Dave
Robicheaux becomes entangled in the affairs of the Fontenot
family, descendants of sharecroppers whose matriarch helped
raise Dave as a child. They are in danger of losing the land
they've lived on for more than a century.

As Dave tries to discover who wants the land so badly, he finds
himself in increasing peril from a lethal, rag tag alliance of
local mobsters and a hired assassin with a shady past. And
when a seemingly innocent woman is brutally murdered, all
roads intersect, and Sonny Boy is in the middle.

With the usual James Lee Burke combination of brilliant
action and unforgettable characters, Burning Angel is
the author at his best -- showing that old hatreds and new
ones are not that far apart.

OK, I like Burke. He's a good solid writer and evokes the West and Southwest beautifully. However, this one's set in New Orleans and while I know he's done his research, he uses terms and words that I, as a well-educated, well-read person, don't have a shred of a clue as to what they mean. The narrator is fine as long as he doesn't have BIG words to try to pronounce or maybe he just has a weird accent, but he intruded on the story for me. The story itself was terribly convoluted with tons of characters and Burke spent so much time describing each one from their hair and the way their necks looked, their clothes -- and these are all long, drawn out, descriptions, full of odd metaphors and funky allusions that you forget what's going on in the story. As I said, I like Burke so I listened to the whole thing twice and there's still a lot I'm confused about. Maybe this is one that shouldn't have been abridged, but I'd give it a wide berth.

James Lee Burke is one of the greatest southern poetic novelists of our day. The plots are not always the most complex, but the characters and the feeling of the deep south are so richly etched into it's pages that the plot at times becomes secondary. Will Patton, could not have been a better choice as the reader for this series of books.