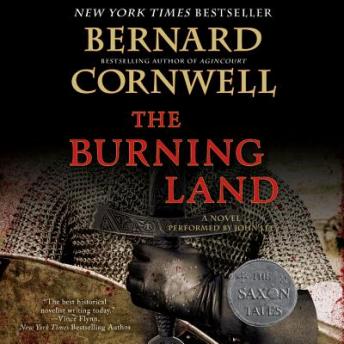 The Burning Land: A Novel

The fifth installment of Bernard Cornwell’s bestselling Saxon Tales chronicling the epic saga of the making of England, “like Game of Thrones, but real” (The Observer, London)—the basis for The Last Kingdom, the hit BBC America television series.

At the end of the ninth century, King Alfred of Wessex is in ill health; his heir, an untested youth. His enemy, the Danes, having failed to conquer Wessex, now see their chance for victory. Led by the sword of savage warrior Harald Bloodhair, the Viking hordes attack. But Uhtred, Alfred’s reluctant warlord, proves his worth, outwitting Harald and handing the Vikings one of their greatest defeats.

For Uhtred, the sweetness of victory is soon overshadowed by tragedy. Breaking with Alfred, he joins the Vikings, swearing never again to serve the Saxon king. Instead, he will reclaim his ancestral fortress on the Northumbrian coast. Allied with his old friend Ragnar-and his old foe Haesten-he aims to invade and conquer Wessex itself.  But fate has different plans . . .

In The Burning Land, Bernard Cornwell, “the reigning king of historical fiction” (USA Today), delivers a rousing saga of Anglo-Saxon England-an irresistible new chapter in his thrilling Saxon Tales, the epic story of the birth of England and the legendary king who made it possible.

Reader did not have the inflection or drama as previous readers. Accents were often not discernible and pronunciation was off from previous books. Cornwell, however, did not disappoint!

This narrator is terrible compared to guy who has read most of the books in this series (who is awesome). This guy has no personality, limited effort to use different voices for characters, seemed in a hurry to get a paycheck. I couldn't wait to get finished with hopes he is not reader for other books in the series.

This reader is ok. But, Jonathan Keeble was by far the best. You could almost believe that he was the character

I love this book and all the Saxon Tales he write in a way that make feel like I am there.

what can I say.... Narrator seems to be like he is in a hurry. I'm sure he fancies himself good.... Should stick to being an auctioneer.

Enjoyed this book like the rest in the series.

This title is due for release on January 19, 2010
We'll send you an email as soon as it is available!