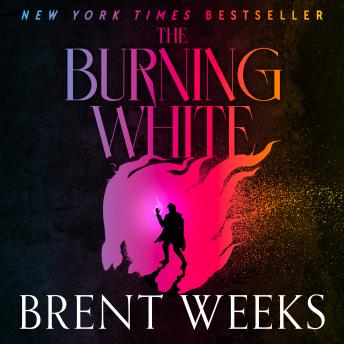 In this stunning conclusion to the epic New York Timesbestselling Lightbringer series, kingdoms clash as Kip struggles to escape his family's shadow in order to protect the land and people he loves.
Gavin Guile, once the most powerful man the world had ever seen, has been laid low. He's lost his magic, and now he is on a suicide mission. Failure will condemn the woman he loves. Success will condemn his entire empire.
As the White King springs his great traps and the Chromeria itself is threatened by treason and siege, Kip Guile must gather his forces, rally his allies, and scramble to return for one impossible final stand.
The long-awaited epic conclusion of Brent Weeks's New York Times bestselling Lightbringer series.
Lightbringer
The Black Prism
The Blinding Knife
The Broken Eye
The Blood MirrorThe Burning White
For more from Brent Weeks, check out:
Night Angel
The Way of Shadows
Shadow's Edge
Beyond the Shadows

fantastic haven't even finished and its great. I don't want it to end

As usual Brent Weeks delivers. The Lightbringer series is fantastic. Loved watching Kip grow and mature. Loved the humor throughout.

I love everything Brent weeks.

This is the 5th book I have listened to the narrator read. He does a great job with the different voices and speaks clearly.

Excellent series! The narrator is phenomenal - truly brings the characters to life.

Awesome! A must read for the true fantasy reader. There were some over detailed points yet a picture was painted masterfully in my mind. I enjoyed the entire Lightbringer Series. Very well written and narrated. Thank you.