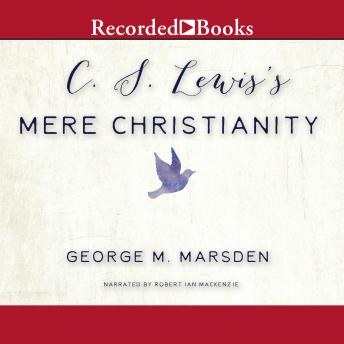 Mere Christianity, C. S. Lewis's eloquent and winsome defense of the Christian faith, originated as a series of BBC radio talks broadcast during the dark days of World War Two. Here is the story of the extraordinary life and afterlife of this influential and much-beloved book. George Marsden describes how Lewis gradually went from being an atheist to a committed Anglican--famously converting to Christianity in 1931 after conversing into the night with his friends J. R. R. Tolkien and Hugh Dyson--and how Lewis delivered his wartime talks to a traumatized British nation in the midst of an all-out war for survival. Marsden recounts how versions of those talks were collected together in 1952 under the title Mere Christianity, and how the book went on to become one of the most widely read presentations of essential Christianity ever published, particularly among American evangelicals. He examines its role in the conversion experiences of such figures as Charles Colson, who read the book while facing arrest for his role in the Watergate scandal. Marsden explores its relationship with Lewis's Narnia books and other writings, and explains why Lewis's plainspoken case for Christianity continues to have its critics and ardent admirers to this day. With uncommon clarity and grace, Marsden provides invaluable new insights into this modern spiritual classic.

Should have read this long ago. Everyone should read this book.

This book was a splendid surprise. I thought I'd chosen C.S.Lewis' classic and was initially disappointed to realize this was instead a book ABOUT the book, Mere Christianity. in fact, it was an unexpected treasure trove of information, insight and instruction in areas of Christian apologetics I had not explored. Both Dr. Marsden's writing and the voice of the British reader made this book a spectacular, unanticipated reading adventure.

I cried many times while listening to this brilliant man offer his deep insights into Christ. I cannot be more grateful to have listened. C.S. Lewis is now my favorite author!

I love C.S. Lewis. He is, I think, wrote a book that every Christian should read, and the, I think, useful for non-Christians to see when they are are trying to understand Christianity.

Gives some background that I found to be helpful. Interesting!

Excellent narrator. The best I’ve ever heard. Great background on a great book. I actually thought I picked the original book, my mistake, but enjoyed the book anyway