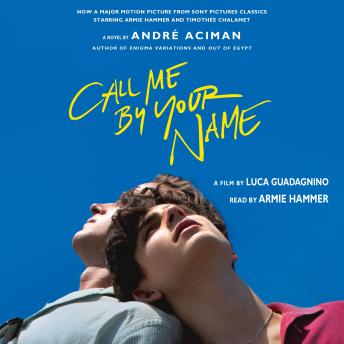 Call Me by Your Name: A Novel

'...Hammer's voice is brimming with such melody that, if you listen to it long enough, you can probably get drunk off it.' — Vulture.com

A New York Times Notable Book of the Year

A Publishers Weekly Best Book of the Year

A Washington Post Best Fiction Book of the Year

A Chicago Tribune Favorite Book of the Year

Call Me by Your Name first swept across the world in 2007. It is the story of a sudden and powerful romance that blossoms between an adolescent boy and a summer guest at his parents' cliffside mansion on the Italian Riviera. During the restless summer weeks, unrelenting but buried currents of obsession, fascination, and desire intensify their passion as they test the charged ground between them and verge toward the one thing both already fear they may never truly find again: total intimacy. André Aciman's critically acclaimed debut novel is a frank, unsentimental, heartrending elegy to human passion.

More praise for Call Me By Your Name:

'...Armie Hammer (who plays Oliver in the movie) steps effortlessly into Elio's interior world. The result is staggering.' — BookRiot

'a must-listen for anyone familiar with the book or film.' — Buzzfeed

'Hammer’s soft, velvety voice lends itself perfectly to the story and its Italian setting. While you might think this one isn’t worth a listen if you’ve already seen the movie or read the book, many reviewers say it is still worth taking in even if you know the story – some even say it’s worth listening to more than once.' — AskMen

This was like listening to an old friend tell the story of his youth. Very moving and beautiful.

I loved this book. It's such a beautifully written love story. I'm not usually one for romance books, but this is different. It's an incredible story about a deep connection of souls. I hung on every word.

This is so beautiful in every way possible and Armie sounds so relaxing. i listen to this on my long drive to work.

The movie makes more sense now. Elio evaluates his every thought and action, as well as speculating on everyone else's. Really fleshed out the film, adding much deeper meaning to it. The ending, which is not depicted in the film, is poignant. If you loved the film and want more, this is the book for you, especially being read by "Oliver", Mr. Armie Hammer. Seven, yes, seven hours being reimmersed in the story of Elio and Oliver. Loved it.

Call me by your name dug into every part of myself— parts that I knew and parts that have now met. It made me feel infinitely young but also as if I had lived a full life and was missing a self that lived decades ago. It made me feel as if my memories are fleeting and I need to do something to make them last forever. It reminded me how fragile and temporary life is. It broke my heart in ways I didn’t know possible and mended it with the acceptance of real life. It makes me want to live my life to the fullest, feeling everything possible, and regretting nothing. I want to buy this book so I can underline every passage that made me feel something.

The book is fantastic. The narration by Armie Hammer made it personal and real. His voice is perfect for this. I hope he's narrated other books. (googling that now.)

This book broke my heart but in the most beautiful way. I have listened this book more that 3 times and i loved it

As an admirer of art, Andre Aciman has catered to my every want in this novel. As far as the audiobook goes, it's beautifully executed. Armie's voice is so dreamy and seductive, drawing you in and trapping you in the ending that will bring you to tears...this book is love in it's purest form. We are all too fortunate to be witnessing it.

Just did not like at all. Slow, too much description.. Could not wait for it to end and sadly the last 15 minutes was the best part.

tedious, nothing happens just teenage angst. not for me but helped me get to sleep.

I really struggled with this book, nothing happens! I don't know how they will make an interesting movie from it, very boring.

odd to have a man narrate from a woman's point of view! couldn't get into it!

I really loved it, and the narration was really spectacular except that some of the dialogue between the two main characters I couldn't tell who was speaking because the author wasn't big on "he said" or "I said" and the narrator used the same voice for both. In a way, considering the story, this was perfect and possibly on purpose but there were several times I had to rewind to try to figure out who was talking and still couldn't quite figure it out and so lost a bit of context.

This book is absolutely amazing, and is written in a style that I’ve never seen before, but want to see more of. The narrator was perfect for the role, and did an amazing job.

Disclamer; I am 39 years old, straight Woman. this Book took me back to all the feelings of my first love, all the endless sadness when it endet all the furiously beautiful ecstatic moments. I found myself crying sobbing (and enjoying the outlet) listened to it 2 times end to end in 3 Days. Will keep going back for sure. Over and over and over. The Writing is beautiful poetic sensual intelligent. The Narrators Voice is absolutely enthralling. (Don’t google him though if u want to keep your peace of mind)

What a beautiful story and performance. I may never be the same after this book. Absolutely stunning. Left my heart racing.

A fascinating audiobook which compliments the beautiful film that I saw earlier, and is well read.

I recently red the book and saw the film for third time. In spite of that audiobook-version gave me a new experience and it brought a joyful feeling. Armie Hammers voice was the best choice for this novel and I hope, there will be more!

It just so good I have no words

Beautiful story, nothing between sex but love, an excellent tone from Armie Hammer. One of my favorite books of all time!

I could not think of anyone but Armie reading such powerful and intense story! His voice, alongside with the narration, is almost hypnotising. I loved the book, the film and now the audiobook, which also is a good exercise for non-native speakers like myself. One more thing, the ending killed me ...and not softly! This story will stay with me forever like no other before or after.

Simply an amazing book to listen to!!

Reminescent of Lolita, this story takes you on a sexual journey alongside a narrator's obsession with the object of his affection. Both lyrical and gripping, at times even shocking, I wish the film would have used the inner thoughts of the narrator to capture the book's supremely engaging sensual nature.

The movie is almost an exact copy of the book. Hoped to get more out of it. The ending has more facts about what happened to Oliver and Elio which movie omitted. The narration by the actor who played Oliver is excellent.

Great book, told in a very original style, so effective it was almost nauseating! The narration was great and exactly fitted the style / story.

Loved it, will definitely read again. The writing is just so complex and really gets you thinking, you can very easily get involved and relate to this story and that’s why I love it.

This is probably my fourth reading of this book, and I suspect not the last. It's so beautiful and heartbreaking and immerses you so completely. And it's broken my heart so many times. Love love love it.

Beautifully read by Oliver himself. Loved it