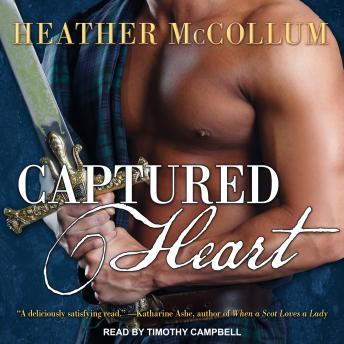 Fleeing with only her bow, horse, enormous pet wolf, and the cryptic clues hidden in her mother's medicine journal, healer Meg Boswell gallops north towards freedom, running from the man who falsely accused her mother of witchcraft. Cursed with magical healing abilities, Meg knows that if she's captured, she will die like her mother-atop a blazing witch's pyre.

Winter winds rip across the Highlands, pressing Chief Caden Macbain forward in his desperate plan to save his clan. He's not above using an innocent woman to bargain for peace if it keeps his clan from starving. But Meg isn't who Caden thinks she is, and when she kills a man to save the clan, he must choose between duty and her life. For although he captured her to force a peace, Meg's strength and courage have captured Caden's heart.

The story was strong and keep my wanting to know what happened next.