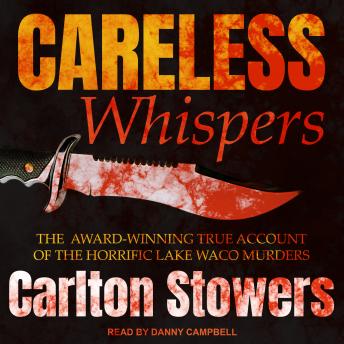 When the bodies of three teenagers were found on the shores of Lake Waco, Texas, in July, 1982, even seasoned lawmen were taken aback by the savage mutilation and degradation they had been subjected to. Yet only fifty-two days after the gruesome triple-murder was discovered, frustrated authorities suspended the case indefinitely.

Patrol Sergeant Truman Simons, who had been called to the scene that night, saw the carnage first-hand-and vowed to find the ferocious killer or killers. He soon became a man with a mission, risking his career and his family's safety in search of evidence. Plunging himself into a netherworld of violence and evil, Simons finally got close enough to a murderous ringleader to hear his careless whispers-and ultimately, put him and his three accomplices behind bars for the brutal slayings.

Now, in his Edgar Award-winning account of the Lake Waco killings, acclaimed true crime writer Carlton Stowers lays bare the facts behind the tragic crimes, the twisted predators, and the heroic man who broke the investigation-with important updated information based on new developments in the case.