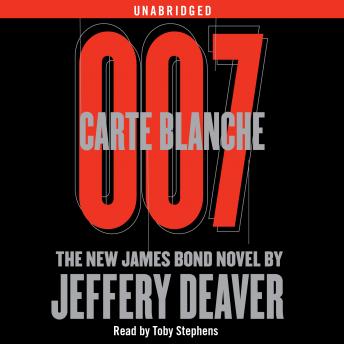 A Night Action alert calls James Bond away from dinner with a beautiful woman. Headquarters has decrypted an electronic whisper—plans for a devastating attack:

James Bond, in his early thirties and already a veteran of the Afghan War, has been recruited to a new organization. Conceived in the post-9/11 world, it operates independent of MI5, MI6, and the Ministry of Defense, its very existence deniable. Its aim: to protect the Realm, by any means necessary.

And Agent 007 has been given carte blanche to do whatever it takes to fulfill his mission...

I listened to this mainly because I'm a fan of Toby Stephens and thought his narration of From Russia with love was fantastic, but I can't say I'd recommend this book. Toby does a good job, although some of the accents are slightly dodgy, but the narration can't really save this story. It has potential but the plot drags and the writing is clunky. Deaver's characterisation of Bond is terribly boring and frankly a bit embarrassing. The novel picks up a bit towards the end but overall I'm not too impressed.

Lackluster, sporadic action and suspense. Too much narrative details. Trying to establish more of Bond's life and character but it just gets boring.

Not bad! As it was my first audio book I had to adjust not seeing Bond on the big screen. Enjoyed listening!

meh... Ok since the review must be 50 characters long I will say it again. meh...

This title is due for release on June 14, 2011
We'll send you an email as soon as it is available!