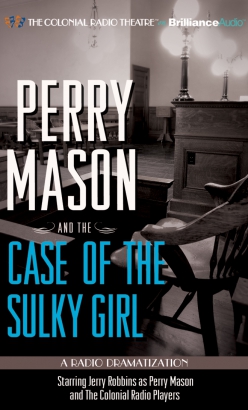 The Case of the Sulky Girl

Frances Celane has good reason to pout. Thanks to a provision in her late father's will administered by her uncle, she's caught in the middle of a family feud between matrimony and money. If she chooses marriage, she loses a million. But beautiful young Frances has a strong will of her own that she's not afraid to use. One way or another, she means to hear wedding bells and cash registers making beautiful music together. Her first move: hire Perry mason to orchestrate things.

Unfortunately, stubbornness runs in Frances Celane's family, as Mason discovers when he confronts her Uncle Edward Norton. After Perry's powers of persuasion fail to penetrate his hard head, someone decides the only way of cashing in is by bashing in the uncooperative uncle's skull. But when the blood spills, so do the secrets. Then it's Mason's turn to brood, as he tries to figure out if a girl as pretty as his client could have a hand in something so ugly....

Case of the Sulky Girl