A Chain of Thunder: A Novel of the Siege of Vicksburg 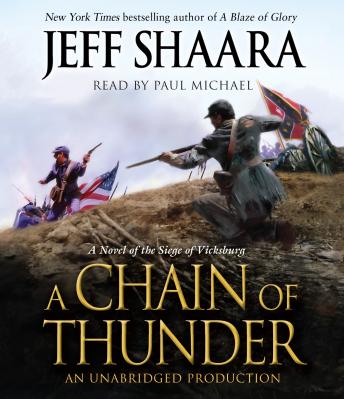 Continuing the series that began with A Blaze of Glory, Jeff Shaara returns to chronicle another decisive chapter in America’s long and bloody Civil War. In A Chain of Thunder, the action shifts to the fortress city of Vicksburg, Mississippi. There, in the vaunted “Gibraltar of the Confederacy,” a siege for the ages will cement the reputation of one Union general—and all but seal the fate of the rebel cause.

In May 1863, after months of hard and bitter combat, Union troops under the command of Major General Ulysses S. Grant at long last successfully cross the Mississippi River. They force the remnants of Confederate Lieutenant General John C. Pemberton’s army to retreat to Vicksburg, burning the bridges over the Big Black River in its path. But after sustaining heavy casualties in two failed assaults against the rebels, Union soldiers are losing confidence and morale is low. Grant reluctantly decides to lay siege to the city, trapping soldiers and civilians alike inside an iron ring of Federal entrenchments. Six weeks later, the starving and destitute Southerners finally surrender, yielding command of the Mississippi River to the Union forces on July 4—Independence Day—and marking a crucial turning point in the Civil War.

Drawing on comprehensive research and his own intimate knowledge of the Vicksburg Campaign, Jeff Shaara once again weaves brilliant fiction out of the ragged cloth of historical fact. From the command tents where generals plot strategy to the ruined mansions where beleaguered citizens huddle for safety, this is a panoramic portrait of men and women whose lives are forever altered by the siege. On one side stand the emerging legend Grant, his irascible second William T. Sherman, and the youthful “grunt” Private Fritz Bauer; on the other, the Confederate commanders Pemberton and Joseph Johnston, as well as nineteen-year-old Lucy Spence, a civilian doing her best to survive in the besieged city. By giving voice to their experiences at Vicksburg, A Chain of Thunder vividly evokes a battle whose outcome still reverberates more than 150 years after the cannons fell silent.

Praise for A Chain of Thunder

“Searing . . . Shaara seamlessly interweaves multiple points of view, as the plot is driven by a stellar cast of real-life and fictional characters coping with the pivotal crisis. . . . [A] riveting fictional narrative.”—Booklist

“Shaara’s historical accuracy is faultless, and he tells a good story. . . . The voices of these people come across to the reader as poignantly as they did 150 years ago.”—Historical Novels Review

“The writing is picturesque and vibrant. . . . [an] engrossing tale.”—Bookreporter

Chain of Thunder: A Novel of the Siege of Vicksburg