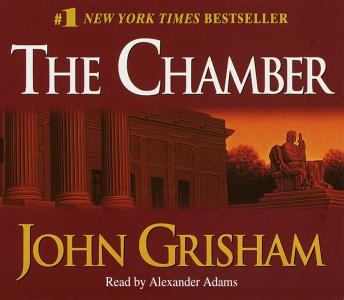 The Chamber: A Novel

In the corridors of Chicago's top law firm:

Twenty-six-year-old Adam Hall stands on the brink  of a brilliant legal career. Now he is risking it  all for a death-row killer and an impossible case.

Sam Cayhall is a former Klansman  and unrepentant racist now facing the death penalty  for a fatal bombing in 1967. He has run out of  chances -- except for one: the young, liberal Chicago  lawyer who just happens to be his grandson. While  the executioners prepare the gas chamber, while  the protesters gather and the TV  cameras wait, Adam has only days, hours, minutes  to save his client. For between the two men is a  chasm of shame, family lies, and secrets --  including the one secret that could save Sam Cayhall's  life...or cost Adam his.

"A dark and  thoughtful tale pulsing wit moral uncertainties...  Grisham is at his best."  --People.

"Mesmerizing... with an authority and  originality... and with a grasp of literary  complexity that makes Scott Turow's novels pale by  comparison -- Grisham returns." -- San  Francisco Chronicle.

A long book that left you wanting more. Grisham is a master storyteller.

This was a very good book. It kept you on the edge of your seat most of the time. I enjoyed listening to this book.

I really enjoy Grisham's work and this was no exception. The compelling story held my interest and left me wanting more when it ended. I particularly like the reader as he has done several of Grisham's works and seems to fit the author's style. Give this one a try!

Not Grisham's best. The story itself is all right, but the tension doesn't build as I would've liked. And the ending is very unsatisfactory. The narrator was so-so... nice accent...

This was kind of a "yawn". Just ho hum - and I'm usually a big Grisham fan. I think he must have just mailed this one in. Oh well - not unpleasant, but very formulaic.

This book was a little hard to follow because there were a lot of different characters- mainly men and they were a little tricky to keep track of. But you get the jist of the story even if you can't keep everyone straight. I enjoyed this book though and would recommend.

A good story but not much mystery. There are a lot of characters and it's a little hard to follow. I should have kept a score card and taken notes. I enjoy John Grisham's novels but I usually read them and/or watch the movie. I didn't realize how hard it would be to follow since I was just listening.

Bored out of my mind! It was a story that never went anywhere. Very disappointing.