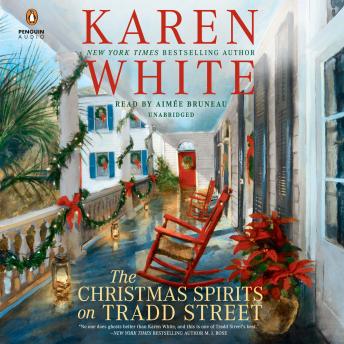 The Christmas Spirits on Tradd Street

The Christmas spirit is overtaking Tradd Street with a vengeance in this festive new novel in the New York Times bestselling series by Karen White.

Melanie Trenholm should be anticipating Christmas with nothing but joy—after all, it’s only the second Christmas she and her husband, Jack, will celebrate with their twin toddlers. But the ongoing excavation of the centuries-old cistern in the garden of her historic Tradd Street home has been a huge millstone, both financially and aesthetically. Local students are thrilled by the possibility of unearthing more Colonial-era artifacts at the cistern, but Melanie is concerned by the ghosts connected to it that have suddenly invaded her life and her house—and at least one of them is definitely not filled with holiday cheer....

And these relics aren’t the only precious artifacts for which people are searching. A past adversary is convinced there is a long-lost Revolutionary War treasure buried somewhere on the property Melanie inherited—untold riches rumored to have been brought over from France by the Marquis de Lafayette himself and intended to help the Colonial war effort. It’s a treasure literally fit for a king, and there have been whispers throughout history that many have already killed—and died—for it. And now someone will stop at nothing to possess it—even if it means destroying everything Melanie and Jack hold dear.

The story line and the loose relationship to Charleston history is a delight, as always. However, the idolization of Jack while denigrating Melanie has almost prompted me to not finish the series. I find the character development of friends and family demonizing Melanie for issues spawned from a way to cope from a childhood of abandonment while consistently bullying her about who she is, what she eats, and how she looks to be tasteless. The idolization of Jack’s deliberate verbal slights towards Melanie, his consistent withholding and lying to Melanie, and his addictions smacks of misogyny. With each book in the series, the author’s progressive idolization of Jack’s faults by praising them or ignoring them while pointing out and heavy handedly dealing with similar if not equal faults of Melanie’s has begun to make the series tedious and frustrating. The narrator, however, does a fabulous job narrating the books.

Good book, and a good plot. Enjoyed the narrator.

I love this series! Can't wait for the next book.

wonderful book. a lot of back ground that I could have done without. I enjoy all in this series. looking forward to the next.