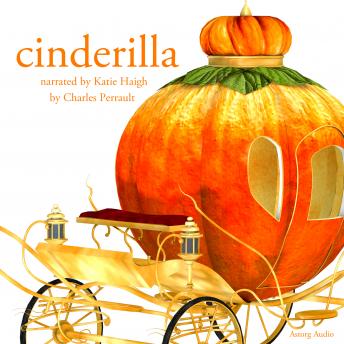 "Cinderella", or "The Little Glass Slipper" (French: Cendrillon or La Petite Pantoufle de verre), is a very famous European folk tale. Once upon a time, there was a wealthy widower who married a proud and haughty woman as his second wife. She had two daughters, who were equally vain and selfish. By his first wife, he'd had a beautiful young daughter, a girl of unparalleled goodness and sweet temper. The stepmother and her daughters forced the first daughter into servitude, where she was made to work day and night doing menial chores. One day, the Prince invited all the young ladies in the land to a ball, planning to choose a wife from amongst them. The two stepsisters gleefully planned their wardrobes for the ball, and taunted Cinderella by telling her that maids were not invited to the ball. As the sisters departed to the ball, Cinderella cried in despair. Her Fairy Godmother magically appeared and immediately began to transform Cinderella from house servant to the young lady she was by birth, all in the effort to get Cinderella to the ball. She turned a pumpkin into a golden carriage, mice into horses, a rat into a coachman, and lizards into footmen. She then turned Cinderella's rags into a beautiful jeweled gown, complete with a delicate pair of glass slippers. The Godmother told her to enjoy the ball, but warned that she had to return before midnight, when the spells would be broken....

This title is due for release on December 31, 2015
We'll send you an email as soon as it is available!