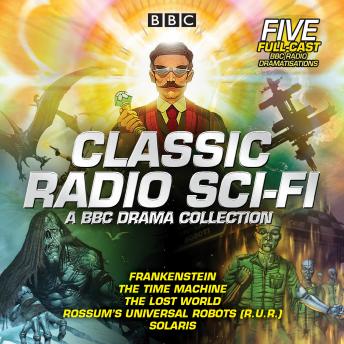 Five seminal science fiction classics are brought vividly to life in these gripping BBC Radio dramatisations, with casts including Robert Glenister, William Gaunt, Carleton Hobbs and Joanne Froggatt. 'Frankenstein' (1994) is adapted from one of the first science fiction novels, Mary Shelley's tale of a scientist who tries to play God and creates a monster. 'The Time Machine' (2009) dramatises one of the first stories to feature time travel, HG Wells' thrilling tale of an inventor who discovers a dystopian future. 'The Lost World' (1975) is based on a classic fantasy adventure story by Arthur Conan Doyle's, whose notion of dinosaurs roaming our world was the inspiration for Jurassic Park. 'R.U.R.' (1989) is a radio production of Karel Capek's thought-provoking play which introduced the word 'robot' to the English language. 'Solaris' (2007) dramatises Stanislaw Lem's pioneering ghost story set in space, both a suspenseful thriller and a philosophical meditation on guilt and the human condition. Accompanying this collection is a bonus PDF file featuring extensive sleeve notes by Andrew Pixley. Duration: 10 hours approx.

This title is due for release on June 1, 2017
We'll send you an email as soon as it is available!