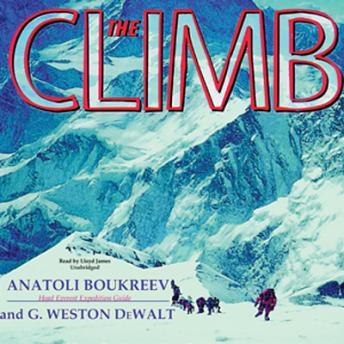 The Climb: Tragic Ambitions on Everest

This is the gripping true account of the worst disaster in the history of Mt. Everest. On May 10, 1996, two commercial expeditions headed by experienced leaders attempted to climb the highest mountain in the world—but things went terribly wrong. Crowded conditions on the mountain, miscommunications, unexplainable delays, poor leadership, bad decisions, and a blinding storm conspired to kill. Twenty-three men and women, disoriented and out of oxygen, struggled to find their way down the side of the mountain. In the dark, battered by snow and driven by hurricane-force winds, some of the climbers became hopelessly lost and resigned themselves to death. But head climbing guide Anatoli Boukreev refused to give up hope. Climbing blind in the maw of a life-threatening storm, Boukreev brought climbers back from the edge of certain death.

This is an amazing true story of an expedition fated for disaster, of the blind ambition that drives people to attempt such dangerous ventures, and of a modern-day hero, who risked his own life to save others.

This title is due for release on January 13, 2010
We'll send you an email as soon as it is available!