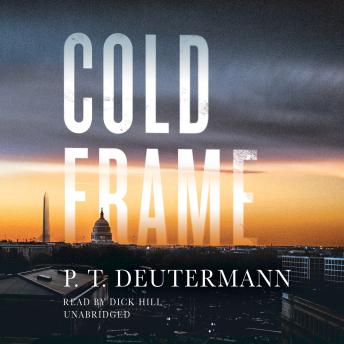 The downtown area of today’s Washington, DC, has become an armed camp. Men with assault rifles crouch on top of monuments and buildings. Antimissile sites bristle on the White House roof. Meter maids carry Glocks and tactical radios, all in the name of federal CT: counterterrorism.

In Cold Frame, the dramatic new thriller by P. T. Deutermann, a secret committee of government and civilian officials maintains a list known as the Kill List, which targets overseas threats to America for termination. When a senior bureaucrat who is part of the Kill List process dies in Washington under mysterious circumstances that include a beautiful woman, a glass of wine, and a bouquet of flowers, Metro detective Av Smith is tasked to investigate. Smith and his fellow detectives soon find themselves besieged by a hornet’s nest of intrigue and deception. With the aid of an FBI agent and a reclusive scientist who nurtures unusual interests, Av digs deeper into the mystery—only to become the target of a plan that reaches into the highest levels of the federal government and far exceeds the mission of the Kill List itself.

Set in contemporary Washington, DC, amid the Byzantine counterterrorism bureaucracy, Cold Frame is a compelling thriller by a masterful novelist whose insider knowledge of how the military, federal, and local intelligence agencies work—or don’t—illuminates the dark world of Washington’s war on terror.

I enjoyed this book and I could listen to Dick Hill read the dictionary .