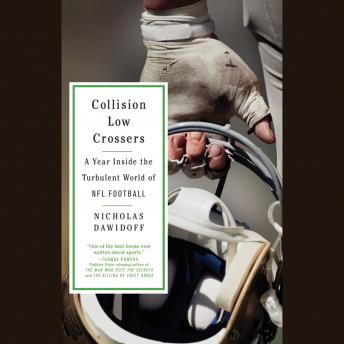 Collision Low Crossers: A Year Inside the Turbulent World of NFL Football

By spending a year with the New York Jets, Nicholas Dawidoff entered a mysterious and private world with its own rituals and language. Equal parts Paper Lion, Moneyball, Friday Night Lights, and The Office, this absorbing, funny, and vivid narrative gets to the heart of a massive and stressful collective endeavor.

Here is football in many faces: the polarizing, brilliant, and hilarious head coach; the general manager, whose job is to support (and suppress) the irrepressible coach; the defensive coaches and their in-house rivals, the offensive coaches; and of course the players.

Wise safeties, brooding linebackers, high-strung cornerbacks, enthusiastic rookies, and a well-read nose tackle: they make up a strange and complex family. Dawidoff makes an emblematic NFL season come alive for fans and nonfans alike in a book about football that will forever change the way people watch and think about the sport.

Collision Low Crossers: A Year Inside the Turbulent World of NFL Football