Come and Get These Memories: The Genius of Holland-Dozier-Holland, Motown's Incomparable Songwriters 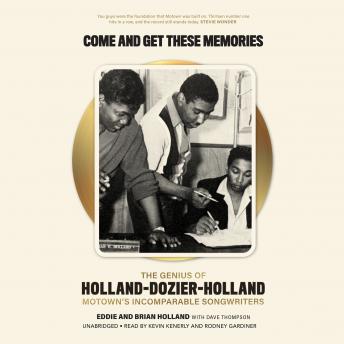 Brian Holland, Edward Holland, and Lamont Dozier, known as Holland-Dozier-Holland or H-D-H, were the greatest songwriting team in American pop music history. Seventy of the songs they wrote reached the Billboard Top 40, with fifteen of these reaching #1 on the Billboard Hot 100 pop chart. No other songwriting team or individual has come close to equaling-let alone surpassing-this record. They've been inducted into both the Rock and Roll Hall of Fame and the Songwriters Hall of Fame. As tunesmiths for the legendary Motown Record Corporation, and for their own corporations, Invictus Records and Hot Wax Records, they wrote and produced hits for Diana Ross and the Supremes, including "Baby Love," "Stop! In the Name of Love," "Where Did Our Love Go," "You Keep Me Hangin' On," "You Can't Hurry Love," "I Hear a Symphony," "Come See about Me," "Back in My Arms Again," and "Reflections."

Now the legendary composers are ready to reveal the inspirations and stories behind their chart-topping hits, providing millions of fans with the first complete history of their songwriting process, and detail the real-life experiences that led them to write each of their most famous tunes. They will also reveal their creative and intimate relationships with Motown's biggest stars.

Come and Get These Memories: The Genius of Holland-Dozier-Holland, Motown's Incomparable Songwriters