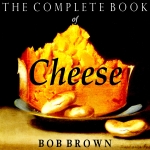 The Complete Book of Cheese

This recording was released to coincide with National Cheese Lovers' Day 2010 in the United States.

Robert Carlton Brown (1886 - 1959), after living thirty years in as many foreign lands and enjoying countless national cheeses at the source, returned to New York and summed them all up in this book.

After majoring in beer and free lunch from Milwaukee to Munich, Bob celebrated the end of Prohibition with a book called Let There Be Beer! and then decided to write another about Beer's best friend, Cheese. But first he collaborated with his mother Cora and wife Rose on The Wine Cookbook, still in print after nearly twenty-five years. This first manual on the subject in America paced a baker's dozen food-and-drink books, including: America Cooks, 10,000 Snacks, Fish and Seafood and The South American Cookbook.

Delightful! I purchased a paperback I loved it so much!

This title is due for release on January 1, 2012
We'll send you an email as soon as it is available!