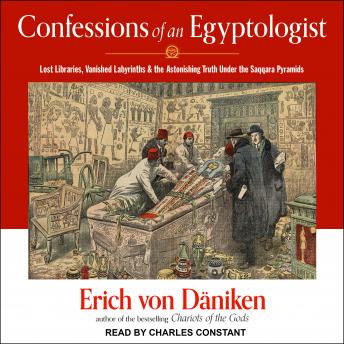 Confessions of an Egyptologist: Lost Libraries, Vanished Labyrinths & the Astonishing Truth Under the Saqqara Pyramids

In this book, Erich von Däniken shares the story of his friend Adel H., an Egyptologist, who, as a sixteen-year-old boy, was trapped for days under the Step Pyramid of Saqqara. Based on his conversations with Adel H., he retells the boy's search for a way out of the underground world, how the boy roamed passageways and chambers and saw what he calls 'impossible' things of which the professional world is completely unaware. Adel experienced uncanny events, a mixture of spirit realm and reality, which is described here for the first time. 'The story of Egypt,' Adel says, 'has two sides-the official one and the unknown one.'

It is secrets like the sights and events Adel experiences underground that von Däniken refers to throughout this book. Von Däniken shows that the Great Pyramid of Giza is nothing but a huge library created for the people of the future. He proves his claim through quotes from the few ancient works that still survive. Who actually had an interest for millennia in destroying knowledge/books? It's not about a few thousand, but about millions of books. Von Däniken documents the fanatical destructive rage of the people and means: If we would only have one ten-thousandth of the former writings, human prehistory would have to be completely rewritten.

This title is due for release on September 1, 2021
We'll send you an email as soon as it is available!