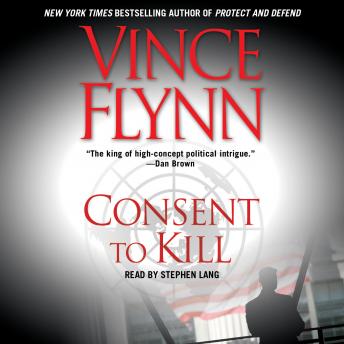 Consent to Kill: A Thriller

For more than a decade, CIA superagent Mitch Rapp has been on the front line of the war on terror. Now, he’s on a race against time to save one more life—his own—in this “fast, fun read” (People).

The influential father of a slain terrorist demands retribution for the death of his son at Rapp’s hands. In the tangled, duplicitous world of espionage there are those, even among America’s allies, who feel Mitch Rapp has grown too effective at his deadly job. They have been looking for an excuse to eliminate the number one counterterrorism operative, and they are determined to seize the chance with an explosive international conspiracy. Now the hunter is the hunted, and Rapp must rely on his razor-sharp instincts for survival—and justice—as he unleashes his fury on those who have betrayed him.

One of his best. Vince will be sadly missed. Even Though Kyle did a wonderful job on the Survivor, Vince is Still Vince. no one like him. Not Thor, not Child, not Grealy, not even Clancy. my opinion of course. Vince the absolute best of the covert genre.

This guy is essentially Jack Bauer from 24! Enough said.

This is a Fantastic "Listen"!! Captivating, Full of twists and turns, Excellent Narration!

No surprise, another excellent book. It’s good to read books in order but if you’re new to Vince Flynn you can read any of them and not feel like your missing something.

Vince Flynn was the master of the genre. I read each book as it was published - I bought a hardcover of each one cause I couldn't wait on the paperback version to come out. I'm now listening to the books in order and enjoying them just as much the second time around.

My new favorite Mitch Rapp book. Amazing story and characters. Unpredictable. Suspenseful. The scenes are so vivid and exciting.

Mitch is hands down one of my favorite characters to read about. Great book!!

Captivating story, lots of action, Mitch Rapp is a such a great character. I’ll be looking for more books in this series. Narration was top notch.

We thoroughly enjoyed listening to this in the car. The story line is good and the narrator engaging. I recommend this one.

Fun read...way to go Mitch Rapp. Can't wait to read the next one.

Edge of the seat intrigue, had to pull over a few times.

I loved it!!!! I was surprised with the ending it made me cry! I am in love with a new author!!!!

Slow beginning than turn exciting. I couldn't put it down!

Each Mitch Rapp book is better than the last. Don't miss this one!

Way too predictable... I read no original thoughts. If I didn't know better, I'd think I had read this twice now!

The author's obvious political views got in the way of an otherwise good story.

Very good book - a little predictable in the end, but overall I enjoyed it and it was quick.

This was a fast pace, easy to listen to story. The reader did a good job keeping the voices of the different people easy to identify. This was downloaded to my MP3 player and the eleven hours kept me nicely entertained. Lots of action and suspense.

Very exciting "read"! We love Mitch Rapp! Even though the story is not very realistic, it kept me and my husband on the edge of our seats!

This was an interesting, well paced book that kept me thoroughly involved all the way through. It did get a little hard to believe toward the end, but I still enjoyed the suspense and the ending. I am always looking for books that make me look forward to my long commute, and this was one I enjoyed greatly.

Excellent book. Keeps your interest and is believable. Am going to "read" all of Flynn's books. Highly recommend.

Excellent story with some very surprising twists. Flynn does a great job at illustrating how politics can get in the way of fighting terrorism, which should give all of us pause for concern. I've read all of Flynn's books to date and the ending to this story left me wondering how Mitch will move forward with his new life.

Typical Mitch Rapp. It was enjoyable but there needs to be a change. He always get his man.

Very riveting book, unfortunately this is the first Vince Flynn book I've read (I wish I'd started with his earlier ones) but I found this one very entertaining and will now go back and read others. Well written. I think Mitch Rapp would match up well with Jack Bauer for those of you who watch 24 (the tv series).

This title is due for release on October 11, 2005
We'll send you an email as soon as it is available!