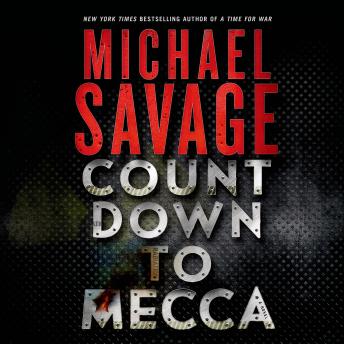 Countdown to Mecca: A Thriller

From The New York Times bestselling author of Abuse of Power and A Time for War and radio host of The Savage Nation comes a powerful thriller, Countdown to Mecca

A plane bound for Amman, Jordan goes down in the Caspian Sea. The crash yields no survivors--save the Russian mercenary who hijacked the flight-and a cask containing an agent of unprecedented destructive potential is missing from the wreckage. A carefully plotted terrorist attack has been put into motion, and the resulting chaos might be enough to push America toward another costly war.

The one man who might be able to stop the attack is Jack Hatfield, a freelance reporter who has never shied away from controversy. After making a politically incorrect statement about Islamic extremists, he has been discredited as a journalist and left to pick up the pieces of his career. But when his half-brother Sammy calls him, saying that his neighbor Ana overheard something she shouldn't have and now both their lives are in danger, Jack realizes he's stumbled upon a conspiracy to destroy Mecca. Now he, and a group of likeminded friends on the fringes of the law, must uncover who is behind the plot and stop them--or else witness the collapse of the world into a war of mutually assured global destruction.

Michael Savage's Countdown to Mecca is a gripping story that takes listeners on a journey where even the seemingly innocent aren't always innocent, the loyal aren't always loyal, and that even those counted on to serve their country, cannot always be counted on to protect it. With the threat of a third world war looming, Jack Hatfield must stop the destruction... before somebody can stop him.