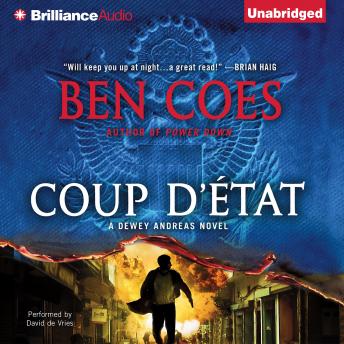 When a fragile peace breaks down and promptly devolves into a rapidly escalating shooting war between Pakistan and India, the United States is forced to intervene. With only hours remaining before the conflict reaches a deadly point of no return, the White House must find a way to shut it down immediately or risk the likelihood of a new global war.

A radical cleric has become the democratically elected president of Pakistan and uses a brutal incident in the Kashmir region as an opportunity to ignite war with India. The highly lethal conventional war spins out of control when Pakistan initiates a nuclear attack. India is on the verge of launching their own nuclear response, one that will have unimaginably disastrous results for both the United States and the world at large.

With only one chance to head this off, the president of the United States sends in his best people to do whatever it takes to restore the fragile peace to the region. With the clock ticking and Pakistan in the hands of a religious radical willing to do anything to destroy India, there remains only one viable option: to execute a coup d’état in Pakistan.

There is only one man with the skills and experience to infiltrate the live war theater and remove the Pakistani president from power. Only one man the White House can trust. His name: Dewey Andreas. Now they have to find him before time runs out.

From the author of the critically acclaimed thriller Power Down comes the latest ripped-from-the-headlines novel featuring his indelible and indomitable protagonist, the unforgettable Dewey Andreas.

Good action but a little slow in beginning