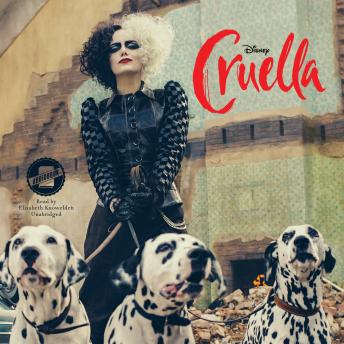 A thrilling novelization that will take listeners inside the story of Walt Disney Studios’ live action Cruella film.

﻿Estella is a clever and creative grifter determined to make a name for herself with her designs amid the 1970s London punk rock revolution. As a girl, Estella befriended a pair of young thieves with an appetite for mischief, and together the trio has been able to build a life for themselves on the London streets. But Estella longs for more than an existence built on stealing to make ends meet.

One day, Estella’s flair for fashion catches the eye of the Baroness Von Hellman, a design legend who is devastatingly chic and terrifyingly haute. But their relationship sets in motion a course of events and revelations that will cause Estella to embrace her wicked side and become the raucous, fashionable, and revenge-bent Cruella.