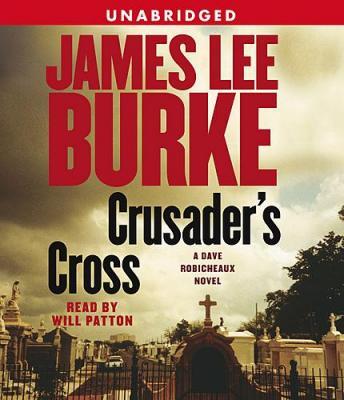 Critically acclaimed and bestselling crime writer James Lee Burke returns to Louisiana where his ever-popular hero, Dave Robicheaux, sleuths his way through a hotbed of sin and uncertainty.

For Dave Robicheaux, life in Louisiana is filled with haunting memories of the past—images from Vietnam, the violent streets of New Orleans, and his own troubled youth. In Crusader’s Cross, a deathbed confession from an old schoolmate resurrects a story of injustice, the murder of a young woman, and a time in Robicheaux’s life he has tried to forget.

Her name may or may not have been Ida Durbin. It was back in the innocent days of the 1950s when Robicheaux and his brother, Jimmie, met her on a Galveston beach. She was pretty and Jimmie fell for her hard—not knowing she was a prostitute on infamous Post Office Street, with ties to the mob. Then Ida was abducted and never seen again.

Now, decades later, Robicheaux is asking questions about Ida Durbin, and a couple of redneck deputy sheriffs make it clear that asking questions is a dangerous game. With a series of horrifying murders and the sudden appearance of Valentine Chalons and his sister, Honoria, a disturbed and deeply alluring woman, Robicheaux is soon involved not only with the Chalons family but with the murderous energies of the New Orleans underworld. Also, he meets and finds himself drawn into a scandalous relationship with a remarkable Catholic nun.

Brilliant, brooding, and filled with the author’s signature lyricism, Jim Burke’s latest novel is a darkly suspenseful work of literature.

Another great book with multiple plots that keeps you on your toes. I love these books.

I am a big JL Burke / Robicheaux fan - another great one. Will Patton does such a great job. Would recommend!!

A entertaining story, had the listener thinking they knew who the culprit was...maybe when he was revealed it was a bit of huh, to me anyways. Thought the reader in this one wasn't of the same caliber of previous readers but I suppose I could of read it myself.LOL

Maybe I'm just a fan of this author, but I like all his books and this one lives up to the others as a great read.

This was great. I do not listen to too many of his in a row because I want to enjoy them from time to time. Will Patton is really good.

This novel was excellent. I couldn't wait to hear the next chapters. I highly recommend it to anyone.

I was enjoying this book, until I started thinking about the timeline. The more I thought about it, the more the main character, Robichaud, became an unbelievable and unrealistic character. Robichaud supposedly has an "entanglement" with a hooker in the late 1950s when he was supposedly a young adult (18 or 20). Then, he supposedly served in the Viet Nam War, but by that time, he would have been too old to be drafted. At the time the book takes place, which is after the World Trade Center attacks, he's still an active cop on the force and he would have to be in his 60s, at least, by then. There is even a reference to Robichaud having a conversation when he was little with a Civil War veteran. I just found all of this to be too ridiculous and unbelivable and it ruined the rest of the story for me.

This book was excellent-the amazing imagery lured me in and did not allow me to daydream-I was riveted by every word. I could hear the sounds, smell the smells... The narrator, Will Patton, did a fantastic job. He embodied the character of Dave Robicheaux-the sad, angry, resigned, haunted hero of this series. My only complaint would be the ending-maybe I read too much into some of the hints and clues given throughout the book, but I was left hanging on a few key points. Otherwise, very satisfying-highly recommended.

James Lee Burke is my favorite author and he just keeps getting better. I've read everything he has ever written. And no one can narrate like Will Patton. I read the book and then I listen to the audio book. You will not be disappointed with either of them.

It was a very interesting story and kept my attention. I would highly suggest this book.

James Lee Burke's prose is so clearly descriptive of people and their environs that one actually feels as part of the story. I could smell the stale bayou water as I listened to the latest in the Robicheaux saga. Great story, and no one else can do Dave Robicheaux like Will Patton. The words flow from his mouth like the sugar from the old Louisiana plantations, and he makes the reader feel every little nuance of the character. You won't be disappointed.

This title is due for release on July 12, 2005
We'll send you an email as soon as it is available!