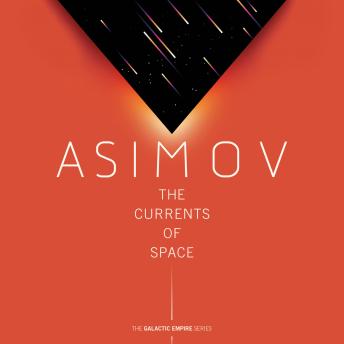 The Currents of Space

The second book in the Galactic Empire series, the spectacular precursor to the classic Foundation series, by one of history's most influential writers of science fiction, Isaac Asimov

Trantor had extended its rule over half the Galaxy, but the other half defied its authority, defending their corrupt fiefdoms with violence and repression. On the planet Florina, the natives labored as slaves for their arrogant masters on nearby Sark. But now both worlds were hurtling toward a cataclysmic doom, and only one man knew the truth--a slave unaware of the secret knowledge locked inside his own brain.

Rik had once been a prominent scientist until a psychic probe erased all memories of his past. Now he was a humble laborer in the kyrt mills of Florina. Then the memories began to return, bringing with them the terrible truth about the future--a truth that his masters on Sark would kill to keep secret . . . even at the cost of their own survival.

I love this book. It's written as a mystery, and there are some memorable moments, especially the confrontation at the end when things are revealed. I regard this as one of Asimov's best books. The narrator also did a pretty good job, with only occasional lapses of the wrong voice (as the narrator self-established them) when sharing dialog between different characters.