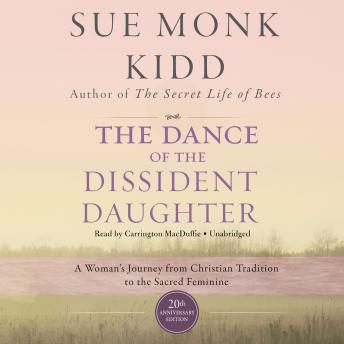 The Dance of the Dissident Daughter, 20th Anniversary Edition: A Woman's Journey from Christian Tradition to the Sacred Feminine

"I was amazed to find that I had no idea how to unfold my spiritual life in a feminine way. I was surprised, and, in fact, a little terrified, when I found myself in the middle of a feminist spiritual reawakening." -Sue Monk KiddFor years, Sue Monk Kidd was a conventionally religious woman. Then, in the late 1980s, she experienced an unexpected awakening, and began a journey toward a feminine spirituality. With the exceptional storytelling skills that have helped make her name, Kidd tells her very personal story of the fear, anger, healing, and freedom she experienced on the path toward the wholeness that many women have lost in the church.From a jarring encounter with sexism in a suburban drugstore, to monastery retreats and to rituals in the caves of Crete, she reveals a new level of feminine spiritual consciousness for all women-one that retains a meaningful connection with the "deep song of Christianity," embraces the sacredness of ordinary women's experience, and has the power to transform in the most positive ways every fundamental relationship in a woman's life-her marriage, her career, and her religion.

Dance of the Dissident Daughter, 20th Anniversary Edition: A Woman's Journey from Christian Tradition to the Sacred Feminine