Dark and Light: A Kindred Tales DUET Novel. Contains: Saved by the Drake AND Captured by the Kru'ell One 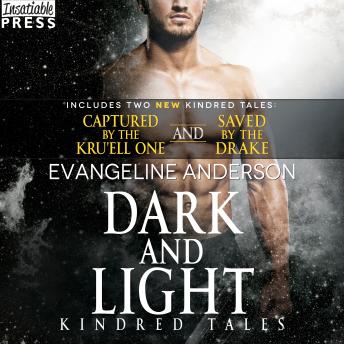 Two NEW Kindred Tales Novels in One Book!One Light and Sweet,The other Dark and Sexy.Which Kindred of Kindred do you prefer?Read DARK and LIGHT and decide for yourself...Light: In Saved by the Drake, Lucia Ramirez is having a terrible day when a huge, scary male confronts her on a dark street. But the scary male turns out to be a Kindred warrior—Raze. And he just needs help with the three motherless kittens he found under a dumpster. As a vet tech working at the Paws and Purrs Pet Clinic, Luci is uniquely qualified to handle Raze’s problem. But can she handle a much larger animal—his Drake? Read Saved by the Drake to find out.Dark: In Captured by the Kru’ell One, Allisandra Stone keeps having disturbing dreams of a huge Kindred warrior with mirrored eyes that reflect her soul. He tells her that he knows all her darkest desires and he intends to make them come true. Alli is certain it’s just a nightmare but when he comes to take her from her bed, she goes with him anyway. Soon she finds herself strapped to the Stinging Frame as Kane feeds on her pleasure in a way no other Kindred ever could or would. Can Alli escape the dark dream she has fallen into…does she even want to try? Read Captured by the Kru’ell One if you dare to find out.

Dark and Light: A Kindred Tales DUET Novel. Contains: Saved by the Drake AND Captured by the Kru'ell One

This title is due for release on February 6, 2021
We'll send you an email as soon as it is available!