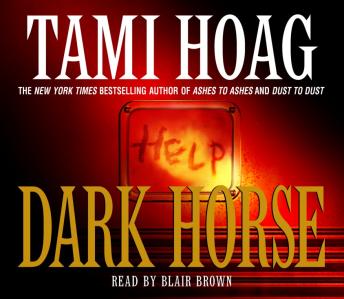 In her latest thriller, New York Times bestselling author Tami Hoag takes readers on a suspense-filled ride of shocks and twists leading to an explosive finish. It is the story of an ex-cop, a missing girl, and a killer locked in a race where there can be only one winner--and the losers die trying.

In a trailer in a Florida swamp, time is running out for eighteen year-old Erin Seabright. A pawn in a kidnapper's terrifying game for a ransom no one can pay, her last hope is a washed-up ex-cop who has already lost it all-not once, but twice.

The wealthy world of the Palm Beach horse set seems a long way from a cop's world in the narcotics division. A lifetime ago, undercover sheriff's detective Elena Estes worked the mean streets and BackTop alleys, living by her wits and playing the long odds until she took one risk too many. Now Estes lives on the ragged edge of lost hope and self-hatred, hiding from the past and believing she doesn't deserve to have a future. But the past is about to come back with a vengeance, and the future is about to become a race between life and death.

A young woman is missing and her twelve year-old stepsister comes to Estes for help. No one but serious, studious Molly Seabright seems concerned about what's happened to her troubled older sister. But Molly is convinced Erin is in danger. Estes has no P.I. license, no interest in a new career, and no desire to break her self-imposed exile. But the more she learns about the people Erin Seabright was involved with, the more her long-dormant cop instincts come back to life.

One trip to the show grounds where Erin worked as a groom, and Estes is quickly pulled to the dark side of a glamorous sport. Behind the glittering, ultra-rich facade is an ultra-ruthless world of drugs, payoffs, and dirty deals. A world of dissolute playboys and crooked horse-dealers, of royalty and rabble, of rivals and enemies. An obscenely wealthy world where anything can be had for a price--including a life.

And in that world stalks a killer who will lead Estes down a dark, twisted trail of decadence and deceit, mayhem and murder--from the gilded life of Palm Beach to the darkest corners of the Florida swamps, to a final show-down that could cost her everything. A race against time and evil. A race in which Estes is the dark horse--and no one is betting on her to win.

good listen....story line was well laid out and narrator did a spot on job....enjoyed the listen and would recommend this book

I enjoy Tami Hoaq books, especially the Joanna Bradley series; living in Arizona I can relate to the areas these take place in and around. This read was a little different than I expected but was good non-the-less. It had the right amount of suspense, mystery and thrill and kept me putting another disc into my CD player.

I love this narrator, Blair Brown...so she made it worth the listen. And I usually love Tami Hoag novels. This book was ok...a little predictable and I felt too much might have been cut out for the abridged version. Entertaining....but now WOW.

I thought this was a great book. Fast paced and well developed.

This title is due for release on August 27, 2002
We'll send you an email as soon as it is available!