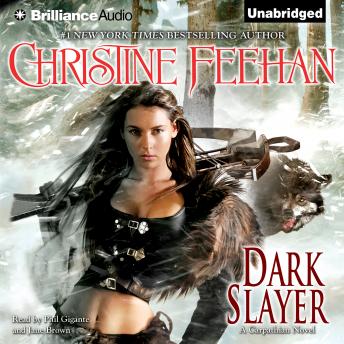 A rumor has persisted in the vampire world of a dark slayer—a woman—who travels with a wolf pack and who destroys any vampire who crosses her path. Mysterious, elusive and seemingly impossible to kill, she is the one hunter who strikes terror in the hearts of the undead.She is Ivory Malinov. Her only brethren—the wolves. Long ago betrayed by her people, abandoned by her family and cast out by everyone she held dear, Ivory has lived centuries without companionship or love. She has sustained her sanity by preparing for one mission—to destroy her greatest enemy. That is, until the night she picks up the scent of a man, her unexpected salvation. Her lifemate. The curse of all Carpathian women.He is Razvan. Branded a criminal, detested and feared, he is a Dragonseeker from one of the greatest Carpathian lineages, yet he has been raised as its most despised enemy. Fleeing from his lifetime of imprisonment, Razvan seeks the dawn to end his terrible existence. Instead he finds his deliverance in the Dark Slayer.In spirit, in flesh and blood, in love, and in war, Ivory and Razvan are made for each other. For as long as they dare to live.

Love the book and the series but the combination of both narrators makes the story mor existing!!!

This title is due for release on September 1, 2009
We'll send you an email as soon as it is available!