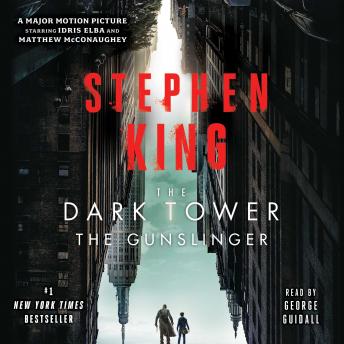 The Dark Tower I: The Gunslinger

“An impressive work of mythic magnitude that may turn out to be Stephen King’s greatest literary achievement” (The Atlanta Journal-Constitution), The Gunslinger is the first volume in the epic Dark Tower Series.

A #1 national bestseller, The Gunslinger introduces readers to one of Stephen King’s most powerful creations, Roland of Gilead: The Last Gunslinger. He is a haunting figure, a loner on a spellbinding journey into good and evil. In his desolate world, which mirrors our own in frightening ways, Roland tracks The Man in Black, encounters an enticing woman named Alice, and begins a friendship with the boy from New York named Jake.

Inspired in part by the Robert Browning narrative poem, “Childe Roland to the Dark Tower Came,” The Gunslinger is “a compelling whirlpool of a story that draws one irretrievable to its center” (Milwaukee Sentinel). It is “brilliant and fresh…and will leave you panting for more” (Booklist).

the book seemed as long as the desert the gunslinger walked through. guess you either love this type of writing style,or it bores you immensely

Imaginative, Super Descriptive, Well Narrated. You can almost see every scene being described. I wanted the book experience before I watched the movie. TKS enjoyed it!

I am a big fan of Stephen King. But this has to be the most horrible book I have ever listen to. I kept waiting for it to get better and it didn't. Very disappointing.

This book wasn’t a good engaging story with likable characters. It might be a great literary work over my head or something but it wasn’t very entertaining. As I kept reading I thought I’d get some direction or clarity of the storyline and it basically never happened. It’s like King had a good story inside and then puked it up in a book lol.

This book was an awful mess. Just a word salad and a dreamscape. I cannot enjoy this book on its own, and I do not really have enough interest in the world to read more in the series

I stopped around the 7th chapter. I couldn’t get into the story at all, and the narrator was monotonous the seven chapters I listened to.

This is a great book. The narrator does a spectacular job. I can't wait to hear the rest of the books in this series.

a great book for listening, enjoyable and visual

A must have! The narration is out of this world and the story is full of characters, scenes and tidbits of expression that keep you totally hooked.

Loved it kept me hanging on until the end and at this moment I'm already listening to book 2.

Magnificent and immersive writing and narration! A beautiful start to a wonderful legend

goog book but the others of the saga get even better

Decent read, but could have more interest. The search tends to linger.

I fell in love with this series from the first moment I read the first book.

Starts slow and strange, but stick with this series; it’s WORTH it 100%

The Niroshan could've been better.

Narration was good enough, I prefer Frank Mullers however.

Fantastic book, loved the narrator , I am really enjoying this app and I am looking forward to the next book in the series, the audio books app makes my long drives so much more enjoyable.

Great start for a great series... Remember that Stephen King's style is a long river leading to the ocean. All his books tend to be slow and descriptive

Not the best for me. I lost interest early with the story. I still have 45 minutes left and not sure if I will finish it. I do love Stephen King but this is my least favorite book.

This book is well written with an interesting concept.

A good book. The audio helped me finally get to sleep on a stormy night.

Lots of unnecessary description....could have been much shorter

I kept hearing great things about this series. the book absolutely let me down. I would have dropped it if not for the narrator.

My first foray into the writing of Stephen King, and I must say I'm astounded. I honestly wish I had begun the journey of the Gunslinger a long time ago,and cannot wait to continue it. Long days, and pleasant nights.

This is literaturally my first audio book. I'm trying to get back into the swing of reading. I read the Gunslinger as a small child and this was a very well paced narration of the book. I was less impressed with the voices. Overall it was a good listen, especially while running.

Love this story Its my 3rd time reading the series. I heard there will be a movie next year so I had to read it again.